Yes or No to TTIP?

Have you come across TTIP yet? It stands for the Transatlantic Trade & Investment Partnership and it is on the lips of businesses on both sides of the Atlantic. Lee Williams wrote a great article on TTIP in The Independent, here, Have you heard about TTIP?

He says don’t get too worried, if you don’t know much about it: you’re not meant to have any knowledge on this subject, he says. The process of working towards an agreement has been secretive and undemocratic, he says. This secrecy is on-going, with nearly all information on negotiations coming from leaked documents and Freedom of Information requests.

The Transatlantic Trade and Investment Partnership is a series of trade negotiations being carried out mostly in secret between the EU and US. As a bi-lateral trade agreement, TTIP is about reducing the regulatory barriers to trade for big business, things like food safety law, environmental legislation, banking regulations and the sovereign powers of individual nations. It is, as John Hilary, Executive Director of campaign group War on Want, said: “An assault on European and US societies by transnational corporations.”

It’s sometimes called the Transatlantic Free Trade Agreement (TAFTA).  The European Union and the USA are currently negotiating a far-reaching trade agreement designed to drive growth and create jobs. It aims at removing trade barriers in a wide range of economic sectors to make it easier to buy and sell goods and services between the EU and the US. 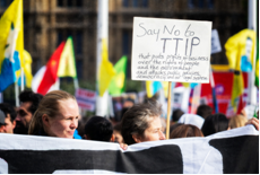 The Europa website, here, says that apart from cutting tariffs across all sectors, the EU and the US want to tackle barriers behind the customs border – such as differences in technical regulations, standards and approval procedures. These often cost unnecessary time and money for companies who want to sell their products on both markets. For example, when a car is approved as safe in the EU, it has to undergo a new approval procedure in the US even though the safety standards are similar.

Talks on the agreement started in July last year.

The Business and Human Rights Resource centre has a useful summary, here. They say it will pertain to goods and services in a wide range of sectors, including manufacturing, services and agriculture.  The purpose of the agreement is to reduce regulatory barriers to trade, including by making the EU and US laws pertaining to health, safety, environment and financial security more compatible.

Independent research shows that the agreement could boost:

Those in favour of an agreement say it would result in multilateral economic growth. But those against it say it would increase corporate power and make it more difficult for governments to regulate markets for public benefit.

BBC News reported on 4 December, here, that a campaign group website says over a million people in the European Union have signed a petition against trade negotiations with the United States. The petition calls on the EU and its member states to stop the talks on TTIP.

It also says they should not ratify a similar deal that has already been done between the EU and Canada. It says some aspects pose a threat to democracy and the rule of law. One of the concerns mentioned in the petition is the idea of tribunals that foreign investors would be able to use in some circumstances to sue governments. There is a great deal of controversy over exactly what this system, known as Investor State Dispute Settlement, would enable companies to do, but campaigners see it as an opportunity for international business to get compensation for government policy changes that adversely affect them.