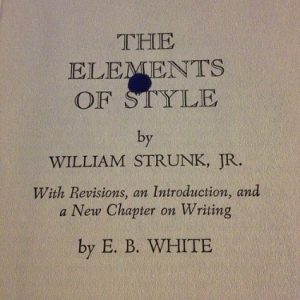 Picture Credit: “The Elements of Style” by Patrick Johanneson is licensed under CC BY-NC-SA 2.0

‘Elements of Style’
In modern times, the original book on writing style, Elements of Style, was written in 1918 by Professor William Strunk, Jr., for use by his students at Cornell University, USA. His strategy was to edit down the complexities of English grammar into just those few basic elements which would help people to improve their writing skills. His central rule was to keep everything as simple as possible (he said ‘omit needless words’). For instance, he kicks off immediately with the apostrophe, the comma, and other points of punctuation which create the most common problems. Only when he has cleared these out of the way does he get down to what he calls the ‘Elementary Principles of Composition’.

Although Strunk’s book is a masterpiece, it should be remembered that it was written in America more than ten decades ago. Thus, there are some differences in spelling and style from that generally used in the UK. The book text is considered to be in the public domain, meaning that it is not subject to copyright.

Please email me at mpollins@bizezia.com if you would like a free copy of the PDF of this groundbreaking book.

‘The Origin and Progress of Writing, as well Hieroglyphic as Elementary’
Pala 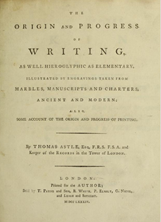 eography is the study of ancient and historical handwriting (that is to say, of the forms and processes of writing; not the textual content of documents).

Included in the discipline is the practice of deciphering, reading, and dating historical manuscripts, and the cultural context of writing, including the methods with which writing and books were produced, and the history of scriptoria.  The first major English work of palaeography is considered to be The Origin and Progress of Writing, as well hieroglyphic as elementary by Thomas Astle. It was published in London in 1784, printed for the author and sold by T. Payne and Son [etc.]. The author was, by all accounts, Keeper of the Records in the Tower of London.

The original book was illustrated by Engravings taken from Marbles, Manuscripts and Charters – Ancient and Modern. It also provided some account of the Origin and Progress of Printing. There have been several reprints since 1784 but the closest most people will get to the book is a page-turning digital archive copy which is available online at: https://archive.org/details/originprogressof00astl_0/page/110/mode/2up

‘A History of Punctuation’
Florence Hazrat is a Leverhulme Early Career Fellow in the School of English at the University of Sheffield, working on parentheses in Renaissance romance. Her first book ‘Refrains in Early Modern Literature’ is forthcoming, and she is currently writing a book called ‘Standing on Points: The History and Culture of Punctuation’. She is well qualified in being able to write about punctuation and an essay she wrote on Aeon caught my eye. Please read it at: https://aeon.co/essays/beside-the-point-punctuation-is-dead-long-live-punctuation. The title of the essay is ‘A History of Punctuation: How we came to represent (through inky marks) the vagaries of the mind, inflections of the voice, and intensity of feeling’.

Ms Hazrat, who describes herself as “an academic and writer, swordswoman, folk fiddler, and radical ecologist with a side-interest in the history of hyenas” writes (an extract from her essay):
“One of the primary purposes of writing in Ancient Greece and Rome was giving lectures and political speeches, not publishing texts. Before going on stage, an orator would work on his text, making subjective, individually determined signs for long and short syllables, pauses for rhetorical effect and breathing, and joining up of words when reading aloud. There was no such thing as reading at first sight.

“Writing without punctuation lasted for many hundreds of years, in spite of individual efforts such as those of Aristophanes, the librarian at Alexandria. Around 200 BCE, Aristophanes of Alexandria wished to ease pronunciation of Greek for foreigners by suggesting small circles at different levels of the line for pauses of different lengths, emphasising the rhythm of the sentence though not yet its grammatical shape. That would remain a task for the 7th-century churchman and encyclopaedist Isidore of Seville.

“Isidore invented the period, comma and colon. He rethought Aristophanes’ punctuation, based on pauses when reading aloud, in terms of grammatical parts of the sentence: an utterance whose sense and grammar were complete would receive a dot at the top of the line, which would eventually migrate down to the bottom and become the full stop or period we know today. An utterance whose sense and grammar were complete but accommodated expansion would get a dot in the centre: the future colon. Lastly, an utterance that was neither complete in sense nor in grammar would be marked off with a dot at the bottom, evolving into the comma. Where previously only the full sentence received a boundary sign, it was now also possible to distinguish the constituents within. Isidore’s ideas circulated widely and, by the end of the same century, Irish monks had added spaces between words to his system of dots. These changes attest to a shift in the perception of writing from record of speech to record of information. Meaning no longer needed to pass from eye to mind via voice and ear, but was directly – silently – apprehended.”