Working: which is best: Hard or Smart? 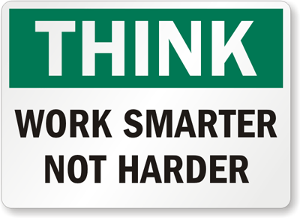 I’ve long tossed the idea around in my mind: which is best: Working hard or Working smart? The truth is, in my view, to work smart rather than (just) hard.

Michael Moroney wrote an interesting article on this subject (The Myth of Working Hard vs. Working Smart) late last month published on Entrepreneur.com, here.  He says that Mike Rowe, host of the popular Discovery Channel series Dirty Jobs, recently highlighted the dichotomy of how work in America is portrayed – in one corner, the romantic, blue-collar ideal of “working harder,” and in the other, the urban, Blackberry-toting notion of “working smarter.”

Mr Moroney introduced a word I hadn’t seen before: listicles. In case you’re as unaware as I am on these things, Wikipedia explains that, in journalism and blogging, a listicle is a short-form of writing that uses a list as its thematic structure, but is fleshed out with sufficient copy to be published as an article. So now you know!

Most articles on the Work Hard Vs Work Smart issue start by discussing the misconception that putting in long hours will lead to success, and then move on to how to cut down your hours and increase productivity by reprioritising your time. Michael Gerber in the E-Myth goes further and says you should spend some of your time working ON your business rather than all of your time working IN it.

As Mr Moroney says, “the problem with the working hard vs. working smart dichotomy is that all too often we frame the choice as one in which we can only choose “hard” or “smart.” The question we should be asking is, why aren’t we doing both?”  I guess that’s exactly what Michael Gerber is saying too.

Mr Moroney adds that growing up on the doctrine of “smarter, not harder” has had its advantages for many in younger generations. By trusting technology and prioritising time-efficiency, we’ve become adept at multitasking and capable of creative, entrepreneurial thinking. We have been conditioned to never being satisfied with the conventional ways of doing things and to keep looking for a better way.

Malcolm Gladwell, the author of Outliers argues that the true story of success is very different to the usual perceptions, and that if we want to understand how some people thrive, we should spend more time looking around them – at such things as their family, their birthplace, or even their birth date. Throughout the book, Gladwell repeatedly mentions the “10,000-Hour Rule”, claiming that the key to success in any field is, to a large extent, a matter of practicing a specific task for a total of around 10,000 hours.

Hard work and smart work alone are not sufficient for business success – ingenuity, vision, risk calculation, and luck, among others, all play important roles.

An article from Harvard Business School nearly 8 years ago, put it aptly: Productivity Means Working Smarter, Not Longer. It drew attention to the fact that workers in the United States put in more hours at work and take fewer vacation days than those in most industrialised countries. Yet the United States isn’t the most productive country in the world.

When it comes to full productivity, according to an article at the time in The Economist, France wins, with people working only forty hours a week with lots of holidays. Makes you wonder if perhaps the current problems in France arise from French being busy (working hard) but doing the wrong things (not working smarter).

The aim of any work effort is to be successful: What do we mean by “successful”? Everyone has their own idea. It could be making lots of money, building up a valuable business, becoming famous, making a difference to people, enjoying life, more holidays, more security or a mixture of these.  If you email me at mpollins@bizezia.com, I will let you have a free copy of Bizezia publication: 130 Reasons why some people are much, much more successful in business than others.