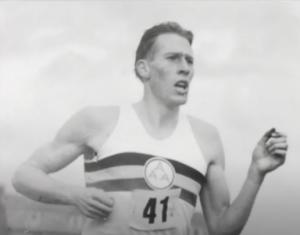 Sir Roger Gilbert Bannister (1929 – 2018) was a British middle-distance athlete and neurologist who ran the first sub-4-minute mile.  At the 1952 Olympics in Helsinki, Bannister set a British record in the 1500 metres but finished in fourth place. He was regarded as Britain’s best middle-distance runner, but the crushing disappointment in Helsinki, a race many expected him to win, strengthened his resolve to become the first athlete to run a mile in under four minutes. The scene for Bannister’s finest moment was an early race in the 1954 season at Oxford University’s ramshackle Iffley Road track, during the annual match between the Amateur Athletic Association (AAA) and the university.

At the time, the Daily Telegraph, described the sub-four-minute mile as “sport’s greatest goal”, something “as elusive and seemingly unattainable as Everest”.

As Guinness World Records put it:
As the crowd’s roar began to get louder, and sensing the moment of a lifetime, Bannister took his cue on the far straight of the last lap and lengthened his stride to speed past Chataway around the final bend.

The Guardian, posting Bannister’s obituary in 2018, put it well:
He never won an Olympic title, he set only one individual world record (which he relinquished after barely six weeks) and he retired from running at the height of his powers when he was only 25. But, on 6 May 1954, on the Iffley Road cinder track that he had helped to lay as an undergraduate a few years earlier, he ran a mile in under four minutes, a target that had begun to assume almost superhuman proportions in the eyes of the public, the media and many athletes, too.

The Video
You can watch the race, here.

You can read more about Roger Bannister in “The Perfect Mile” by Neal Bascomb – a non-fiction book about three runners and their attempts to become the first man to run a mile under four minutes and their first subsequent head-to-head competition.  The runners are Roger Bannister, the American Wes Santee, and the Australian John Landy. The book is on sale at Amazon, here.