On a train to nowhere: The UK and Europe – A Soured Relationship 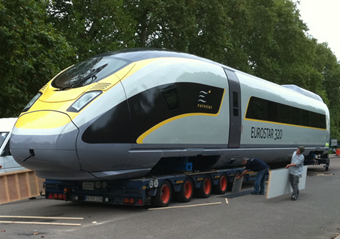 The papers have been full of it. David Cameron is extremely angry about the demand from the EC to pay £1.7 billion by way of adjustment to reflect, in part, how well the UK economy has been performing. He says that he won’t pay the demand by 1 December. Apart from the immigrants queuing up to get into the UK, nobody seems to love us anymore.

Actually, the EC bill is more than the amount referred to above. The total due on 1 December is actually €3.591 billion, EU sources explained. The UK would however receive a one-off rebate of €1.491 billion under a separate amended budget for 2014 currently under negotiation, and expected to be agreed on before the December deadline.

The EU’s Budget Commissioner Jacek Dominik has added fuel to the fire telling journalists he was “surprised by the reaction” in Britain because “up to this moment there was no single signal from the UK administration that they had problems with this figure.”  His comments seem at odds with what the UK didn’t know about this unexpected bill. But the apparently unfriendly Mr Dominik makes it worse saying:  there was no possibility under current EU rules to give Britain more time to pay the bill and a change to the law would need support from a qualified majority from EU governments and this would be “extremely difficult”.

Because most people have been (apparently) kept in the dark about these matters, I was (very slightly) encouraged to read what Mr Dominik wrote on his website: “I shall strive to make an impact of the EU budget visible to the people across Europe.”  His words are odd – what does “an impact” mean? How many impacts are there?

In a press release on 27 October, the EC provided clarification in a question and answer paper on the contributions made by Member States to the annual budget

The UK isn’t the only Member state that’s been hit. Why aren’t the others kicking up a fuss too?  The answer is that they seem to be adopting a less confrontational stance than the UK and may get a more sympathetic hearing.

Dutch Finance Minister Jeroen Dijsselbloem says that the Netherlands would pay its €642m surcharge “if the facts and figures are correct”. Taoiseach Enda Kenny says Ireland will pay the additional bill. Maltese Prime Minister Joseph Muscat wants clarification on how the EC calculated the figures. Sandro Gozi – Italy’s Europe minister – is reported as saying “We will see whether it will be really necessary to apply the new method to calculate (national) contributions.” See here for commentary. Apparently, Italy and Greece will have to pay an extra £268m and £70m, despite flagging growth, because of the size of their ‘black economies’, according to Public Finance International. 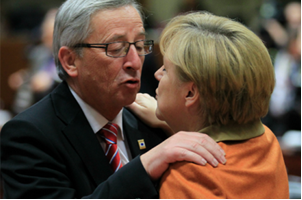 Back in June, David Cameron declared that Britain is in a ‘war’ with the EU after European leaders pushed through the appointment of arch-federalist Jean-Claude Juncker [pictured with Germany’s Chancellor Merkel] as the new President. Our Prime Minister probably won nobody over when he warned other Members that they would be making a ‘profound mistake’ if they chose Mr Juncker. His words fell on stony ground because Mr Juncker was duly appointed. He seems to have Germany as an ally – see picture. Should our PM try charm rather than threat to bring about the changes we want?

Actually, the threat of an exit from the EU probably hasn’t warmed the EC administration towards the UK and pressing for renegotiated terms of EU membership won’t have helped either. Nobody else seems to want the immigrants floating around Europe who, it seems, think that the UK is the best place to start a new life – David Cameron has been seeking some limitations to the freedom of movement, which has resulted in the uncontrolled immigration that is the subject of huge concern to many British voters.  However, Angela Merkel, the German Chancellor, has dismissed the prospect of any radical change saying that “Germany will not tamper with the fundamental principles of free movement in the EU”, according to an interview in The Sunday Times.

The galling thing is that France and Germany are likely to get back around the same amount of money in aggregate that the UK is being asked to pay on the budget adjustment issue.

We know (from what we’ve been told by the papers and on TV) that France is doing badly.  But most people thought the Germans were running a strong economy and were the powerhouse of Europe. There’s even a suggestion that the German economy could lead Europe back into recession. Read about it here. The article suggests that whilst Germany’s banks may have got the all-clear, there are worrying signs of weakness in Europe’s powerhouse economy.  German business confidence has fallen to its lowest level in almost two years, a survey suggests, raising concerns about the strength of Europe’s largest economy. The Ifo think tank’s closely watched German Business Climate Index fell to 103.2 in October, down from 104.7 in the previous month. “The outlook for the German economy deteriorated once again,” Ifo said.

On the bright side, the UK has some support from an unexpected source – see here – former French Europe Minister Pierre Lellouche (who unfortunately doesn’t have a vote on the matter) says:

Judith Ugwumadu, writing in Public Finance International (here) put the situation like this:

“A number of European Union member states have been hit with unexpected bills to fund the EU’s budget, while other countries are expected to cash in. The bill is based on new calculations of VAT and gross national income since 1995, which has prompted the EU to make financial adjustments. The calculations are used to decide how much each member state should contribute to the budget. EU country leaders were, however, caught off-guard as details of the one-off bill were exposed as a summit in Brussels began today. The extra payments are due on December 1.”

What else is going on?

On 28 October, the European Commission proposed to provide Italy with €1.8 million from the European Globalisation Adjustment Fund (EGF) to help 608 former workers of Whirlpool Europe S.r.l. to find new jobs. The redundancies occurred in the Autonomous Province of Trento. The proposal now goes to the European Parliament and the EU’s Council of Ministers for their approval. Italy applied for support from the EGF following the closing down of Whirlpool’s plant in Spini di Gardolo (Trento) specialised in the production of fridges.

The EC press release says that the total estimated cost of the package is approximately €3.1 million, of which the EGF would provide €1.8 million.

The reason I mention this is that I cannot understand why the EGF is paying anything at all. Surely the total cost involved should be shared between Italy and Whirlpool itself, shouldn’t it?  Whirlpool, the US White goods manufacturer, is a huge company with global sales approaching $5billion a year. Read about it here. Why should the UK have to pay for any of this?

Back to the EC budget demand: The Telegraph this week suggested that Europe’s financial demands will backfire on the Bureaucrats from Brussels: On the one hand they say they want Britain to remain a member, yet “they behave in precisely the fashion most likely to bring that membership to an end”. Read about it here. The Telegraph says that on its own, this episode (the £1.7 billion bill) would be bad enough but it fits a pattern. They put it like this:

“There has been the concerted effort on the part of European leaders to slap down Mr Cameron for suggesting that there may need to be some limitations to freedom of movement, which has resulted in the uncontrolled immigration that is a subject of huge concern to many British voters. Then there has been the European Parliament’s unilateral and high-handed decision to ignore the wider EU budget deal agreed by national leaders – particularly galling to Britain because it was Mr Cameron who persuaded his colleagues that Brussels should share the pain of austerity felt so keenly elsewhere.” 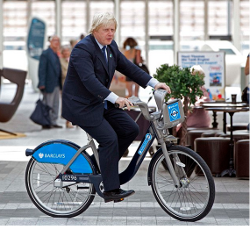 Last words – On your bike?

The Mayor of London, Boris Johnson, is quoted in The Politics Companion as saying:

“The best reason for going into politics is to stop people bossing you and me around and to stop them taking away your and my money for no good reason at all”.