The Titanic was on fire for days before it sank 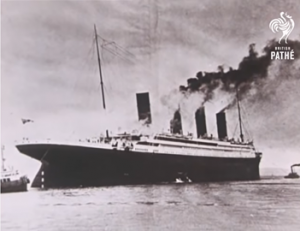 The picture, above, is a screenshot from a British Pathé video Did Titanic Really Sink, which you can view by clicking here.

Another video, here, also from British Pathé, captures some of the only genuine footage available of the Titanic prior to it sinking, the rescue of survivors and The Mackay Bennet leaving Halifax in search of the dead.

The transatlantic Titanic was the largest ship of its time, but its life was very short. The first and only voyage of the ship began April 10, 1912, and ended 4 days later. This tragedy occurred on the night of April 14-15, 1912. When the Titanic crashed, at least 1,496 people died, making this disaster one of the largest shipwrecks in history. Among the passengers of the ship were some of the richest people in the world, as well as immigrants from Ireland, Great Britain and Scandinavia, who were heading to the United States in search of a better life.

Michelle Kiisa wrote on Quora.com that the Titanic was on fire for days before it sank. Almost everyone knows about the claims beforehand that the massive cruise liner ship was deemed “unsinkable”. The company that built it was so sure it wouldn’t sink that they didn’t bother with the necessary number of lifeboats. Regardless of the incident happening over a hundred years ago, its movie-like plot is still evolving. The popular explanation for the sinking is that the ship hit an iceberg.

But new information came to light in 2017 that the Titanic was on fire for days as it was sailing, possibly longer than that, according to The New York Times, here. [This information is supported in an article in The Independent on 1st January 2017, here].  A coal fire was burning below deck for days and the crew was unable to put it out. The ship sailed along anyway with a fire burning in the hull.

The fire was known about before the ship left Belfast with five men trying to put it out yet the only way to put out a coal fire in a bunker-like this was to put the burning coal into the ship’s furnace.

Coal fires are not the easiest to extinguish – take, for example, the coal fire in Centralia, Pennsylvania, a coal seam fire that broke out in a mine in the Northeast United States and has proven impossible to put out and it’s been burning since at least 27th May 1962.

The Titanic had several bulkheads designed to keep seawater from spreading in case of a hull breach and quite coincidentally,

coincidentally, the fire broke out right next to the main bulkhead with temperatures reaching around 1,800 degrees Fahrenheit causing it to be severely damaged. Yet by the time the fire was noticed, it could have been burning for weeks. The ship had been known to travel at full speed regardless of the warnings of icebergs, this could have been because of the excess coal being shovelled into the furnace non-stop for three days but we can’t be too sure, yet this could explain why it hit the iceberg at full speed.

When the iceberg hit, the Titanic’s designer was aboard the ship and evaluated the strike damage. Even at that time, he seemed to think the ship wouldn’t sink—as long as the bulkheads held up. If the Titanic could have stayed afloat for a few hours longer, the magnitude of the historic tragedy may have been averted with the bulkheads as the ship’s prime defence against the ocean.

The ship’s lack of lifeboats was rationalised because the Titanic itself was thought to be a lifeboat.

Now if you’re wondering why it left port in the first place with a fire raging below, Michelle Kiisa says that the company operating the Titanic was in deep financial trouble. The introduction of the Titanic had already been delayed and with her sister ship damaged, the Titanic needed to sail on schedule otherwise the company might have imploded. [The evidence to support that assertion is not in the Quora.com article.]

Despite the 2017 evidence, nobody can deny that the story of the Titanic is a tragedy that could have been avoided and the people onboard died needlessly horrible deaths. In the end, the only thing the new evidence indicates is a new level of negligence and risk-taking by those in charge.