Guest Blog: The rise of the Chinese middle class

The other day I was talking to Sofie Persson, a solicitor with Engleharts Solicitors in Hove, East Sussex about an article she was writing on the rise of the Chinese middle class. Her article includes some personal observations rather than just focusing on market research and statistics. She is planning to write an article on Chinese real estate investment in the UK from a different perspective as most of the press so far seems to focus on commercial rather than residential deals. We look forward to seeing that article.

By way of background: Sofie spent a few years living and working in China before she decided to return to the UK to pursue a career in law.

Here is what Sofie wrote about the rise of the Chinese middle class: 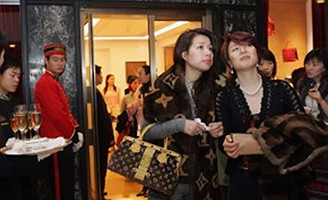 “Improved trade relations between the UK and China along with an increasing number of Chinese children being educated in top schools are among the key factors driving Chinese investment in prime central London property. Chinese middle class buyers have tended to focus on the prime residential areas, such as Kensington and Chelsea and along the River Thames, in upper price bands and in new build high-rise flats, rather more than on the resale markets.

For example, a couple of my former colleagues bought flats in new developments in Greenwich and Surrey Keys a couple of years ago. It would also be interesting to hear what local professionals have to say about Chinese buyers.

Whilst the west has had several decades of sweeping economic change and social transformation, China’s middle class has only had the better part of two decades to establish themselves as an economic force to be reckoned with.  Businesses of all shapes and sizes are salivating at the thought of this vast and largely untapped customer base. Many have already adapted their marketing strategies according to widely accepted hypotheses about Chinese spending behaviour. Others are weary of how the rapid increase in Chinese purchasing power will affect their domestic economies.  Regardless of one’s personal attitudes we are beyond denying that China is the future, but the true nature of the Chinese consumer cannot and should not be confined to statistics colourful pie charts alone.  It is intriguing how many of the existing market research reports tend to overlook cultural motivations, on the other hand it is understandable that one would think twice before making wide generalisations about 1.3 billion people. It is still important to have a basic understanding of cultural differences.  I have been going to China since 1999 and spent a number of years living and working in Guangzhou and Beijing.

In light of the above I have made the following observations. It is widely accepted among themselves that the Chinese are a very status conscious people and would pay premium prices for products that they believe enhance their social standing. Like most foreigners I would be looking for bargains and brand name replicas which were readily available in the “fake markets”. My affluent middle class colleagues would make a point of buying similar items at full retail price in the “official stores”. A fellow expatriate once tried to organise company t-shirts for a corporate teambuilding event. Much to his dismay, he rapidly discovered that it was suddenly extremely important that the t-shirts were “real” mingpai (a famous brand) t-shirts bought from the “official store”. His team members wouldn’t have it any other way and would readily spend 150 reminbi (£15) per t-shirt rather than the 5 renminbi (50p) per t-shirt my friend had budgeted for.

By 2015, it is expected that one-third of the money spent around the world on high-end bags, shoes, watches, jewellery, and ready-to-wear clothing will come from Chinese consumers. However, for products and services that their neighbours and friends can’t see, they appear to be very price conscious. I have spent many hours in economy class travelling back and forth between Europe and China. I was always amazed by how many designer shopping bags my fellow Chinese economy class travellers were carrying. I was later told by a colleague that a Chinese woman who would gladly show off a £800 handbag to her friends but would never spend money on a first class ticket.

On the other hand, what westerners would consider budget establishments, such as McDonald’s or KFC, are not the bottom of the price range items in China. Incredible as it may seem, they are significantly more expensive and therefore enjoy a higher status than their Chinese equivalents. It was also not unusual to spot happy couples on first dates at the IKEA canteen in Beijing.  Conversely, most middle class Chinese own a car and Beijing ring roads become giant parking lots during rush hour. Meanwhile many urban western counterparts, like myself, choose not to have a car for environmental and practical reasons.

Statistics and development indicators can therefore be misleading and multinational corporations are beginning to respond by implementing state-of-the art marketing strategies to stay ahead of the curve. For instance, P&G has built small hutong neighbourhood – a set of narrow, traditional Chinese lanes formed by the walls of a siheyuan, or traditional courtyard homes, at their Beijing Innovation Centre. In this artificial neighbourhood, consumers are being observed as they brush their teeth or change diapers.

In the same research facility, P&G also stock simulated supermarket shelves with its own products and those of competitors to better understand how the Chinese consumers shop. For example, as incomes rise more and more Chinese people are turning to skin whitening products to clearly mark their social standing. I personally found that it was difficult to find basic hygiene products, such as soap, shower cream and moisturisers that did not have a faint smell of bleach.  It is important to note that this is not an attempt to look like glamorous western celebrities, the Chinese want to look like fair skinned Chinese people. It is also not a question of race. Bar some ethnic minorities the China’s population are predominately Han Chinese and consider themselves as one race. Instead of indicating race, skin colour is directly connected to class.  Traditionally people with darker skin were the ones that worked outside in the sun which in turn meant that they were poor. I think it is safe to say that in this day and age nobody in the Chinese middle class wants to think of themselves as a peasant.

Personal anecdotes aside, the rise of the Chinese middle class is still fascinating. As late as 2000, only 4% of urban households in China were middle class. By 2012, that figure had risen to 68%.  Research show that by 2022 more than 75% of China’s urban consumers will earn 60,000 to 229,000 renminbi (£6,000 to £23,000) a year. This may not seem very impressive but in purchasing-power-parity terms this is between the average income of Brazil and Italy. McKinsey & Co has been tracking consumption dynamics since 2005 and has seen a bifurcation between a still large (but less affluent) mass market and a new even larger group of upper middle class consumers.

This new “upper cut” is able and willing to pay a premium for quality and to consider discretionary goods and not just necessities. There are also two distinct generation groups, Generation 1 (G1) and Generation 2 (G2). The most prominent being the latter and are typically teenagers and people in their early 20s, born after the mid-1980s. Their G1 parents lived through years of shortage and hardship and therefore focused on building economic security.

The G2 consumers on the other hand, are considered to be the most westernised to date and can afford pretty much what they want. Born during a period where the one child policy was strictly enforced and many still living with their parents. In 2020 it is expected that 35% of all consumption in China will come from these young consumers who are also better educated and much more international in their outlook.  However, they still share some traditional values with previous generations, and as a whole, the Chinese middle class appears to have a bias for saving, an aversion to borrowing and are determined to work hard.

Some commentators have even compared the rise of the Chinese middle class to the American Dream. There are definitely similarities in the can-do spirit, optimism and determination to pursue a better life. However, it is important to remember that China is not a capitalist system, despite appearances and elements of its development having capitalist characteristics. Since, 2002 the Chinese Communist Party has welcomed the idea of expanding the middle class so that it becomes more than half the total population by 2050 in order to encourage consumption and to ensure social stability.

The common belief for the past 20 years outside China seems to have been that the more China opens up to the west, democracy will inevitably follow. China’s socio-political experience is not that of the western world, so even though what they buy is becoming more and more similar to western consumers, the middle class still remains an essential part of the state and ideology from which it has emerged… albeit, with a foreign degree and a designer handbag on their arm!