The RAF’s 100th birthday and the Bouncing Bomb

The Royal Air Force (RAF) was founded by the amalgamation of the Royal Flying Corps and the Royal Naval Air Service and was controlled by the British Government Air Ministry which had been established three months earlier. It is the United Kingdom’s aerial warfare force. It was formed towards the end of the First World War on 1 April 1918.

Following the Allied victory in 1918, the RAF emerged as the largest air force in the world at the time.

After the First World War, the RAF was reduced in size and during the inter-war years was used to “police” the British Empire.

The RAF underwent rapid expansion prior to and during the Second World War. During the war it was responsible for the aerial defence of Great Britain, the strategic bombing campaign against Germany and tactical support to the British Army around the world.

During the Cold War, the main role of the RAF was the defence of the continent of Europe against potential attack by the Soviet Union, including holding the British nuclear deterrent for a number of years. After the end of the Cold War, the RAF took part in several large-scale operations, including the Gulf War, the Kosovo War, the War in Afghanistan, and the Iraq War.

The Bouncing Bomb
The August 2020 edition of Surrey Life (here) had an interesting and very human story about Barnes Wallis and the bouncing bomb he invented.  Barnes Wallis designed the “Bouncing Bomb” (code name: Upkeep) for Operation Chastise, the attack on Germany’s Ruhr Valley dams. That Operation was carried out on 16th 17th May 1943 by Royal Air Force No. 617 Squadron, later called the Dam Busters. The bombs were given their name because they could skip on water and avoid torpedo nets, before sinking and becoming a depth charge. 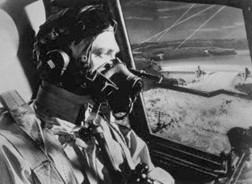 Although the Lancaster was primarily a night bomber, it excelled in many other roles, including daylight precision bombing: in the latter role, some Avro Lancasters were adapted to carry the 12,000 lb (5,443 kg) Tallboy and, ultimately, the 22,000 lb (9,979 kg) Grand Slam “earthquake” bombs (also designed by Barnes Wallis).

You can see a video here taken from the 1955 classic war movie ‘The Dambusters’. Wing Commander Guy Gibson’s Lancaster crew attacked the Mohne dam while under fire from the dam’s defences. The late actor Richard Todd, who portrayed Wing Commander Gibson in this movie, was himself a veteran of WW2, having taken part in the capture of Pegasus Bridge in the early hours of D-Day, as a member of the Parachute Regiment.

The picture (bottom left) is a screenshot from the film.

Sad to note: Commander Gibson continued to fly and was killed in action while on another raid over Germany, his plane crashing in the Netherlands on 19th September 1944. He was only 26 years of age.