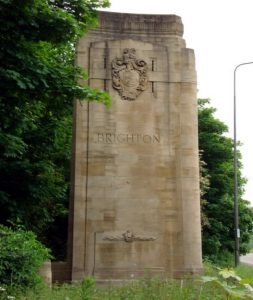 Source: The Beauty of Transport, here.
The following text is an extract from that source.

Anyone who has travelled southward on the road to Brighton, will have seen two architectural structures at Brighton’s northern border on the A23 at Patcham, The Patcham Pylons frame the southbound carriageway of this dual carriageway road, proudly telling drivers that they have entered the environs of Brighton.

The Patcham Pylons were built in 1928, to commemorate an extension of the boundaries of what was then the County Borough of Brighton (it only became a city, along with Hove, in 2000). They are not really pylons at all in its general sense in strict architectural terms a pylon is two monumental towers, joined by a lower structure. They are perfect examples of 1920s Art Deco design, which often drew inspiration from ancient Egyptian motifs. In plan, they are triangular (isosceles) with the narrow parts pointing towards the carriageway. A tapering column is carved at this vertex. The long sides feature panels with carvings and inscriptions. At the top, the pylons step back and have a thoroughly Deco fluted design. The inscriptions on the panels mark the construction of the pylons, except for the north face of the western pylon, which has a relief sculpture of a woman holding an ankh (explanation: the ankh or key of life is an ancient Egyptian hieroglyphic symbol that was most commonly used in writing and in Egyptian art to represent the word for “life” and, by extension, as a symbol of life itself. The ankh has a cross shape but with an oval loop in place of an upper bar) and torch, over the words:
Hail guest – we ask not what thou art.
If friend, we greet thee, hand & heart:
If stranger, such no longer be:
If foe, our love shall conquer thee.

Fuller description of the Pylons
Public Sculptures of Sussex describe the pylons in more detail:

The 2 long sides and the outer side are very slightly concave in plan but with flat panels superimposed upon them, and concave-chamfered buttresses at the corners; the narrow end is treated as a tapering engaged column; the long sides carry inscriptions and emblems of Brighton and the County of Sussex, carved in relief; the top of the pylons are set back all round, and fluted. There are low curved stone seats next to the pylons, segmental in plan, and embracing but not touching the ends of the pylons; moulded seat with stepped backs about 1m high between squat columns of stepped profile that once held bronze lamps.

The pylons were designed by local architect John Leopold Denman, though the inscription on the east pylon adds Charles Kingston as an architect. The pylons were substantially funded to the tune of £2,555 by local councillor Herbert Carden, who must have been enormously proud of the extension of his borough council’s limits, with a public subscription of £993 making up the rest of the cost.

Around the base of each pylon is a seat, also by Denman, of a moulded stone design, running between stepped columns. Both pylons and both seats were listed by Historic England in 1999, at Grade II.

The west pylon together with its seat, is forlornly marooned in the central reservation of the A23, and they are now virtually inaccessible. When the pylons were built, they framed the road perfectly, as the A23 then was a single carriageway. It has since been doubled to a dual carriageway, leaving the western pylon marooned in the central reservation. Its seat is essentially useless, as you’d be taking your life into your hands to try to reach it.

When they were built, they must have been considerably more attractive, because traffic speeds then were a lot lower, traffic much less dense, and maximum vehicle size a lot smaller. The pylons witness each year a reminder of this lost age of motoring because they are on the route of the annual London-Brighton veteran car run.

Details of the pylons’ design and their place in events commemorating transport history are likely to escape you as you zoom past them at 70mph or so. Hopefully, this article will fill in one or two gaps for you.

A Little History of the A23
Source: Dabre, here: Unlike many of the “First 99” roads that start in London, the A23’s London section hasn’t really changed since 1935. The southern end, on the other hand, particularly south of the M23, has seen many improvements, resulting in today’s road being mostly dual carriageway south of the M23 as far as Patcham where it meets with the A27.  The original start of the A23 was at Purley Cross, where it met the A22 and A235. The remainder of the route north, including the then-unbuilt Purley Way (which opened in April 1925), was part of the A22. The numbers switched in the 1935 Road numbering revision.