The man who almost conquered the world 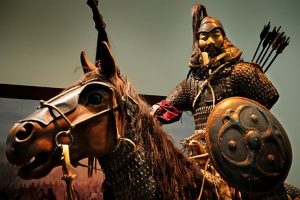 Picture Credit: “Genghis Khan: The Exhibition” by williamcho is licensed under CC BY-SA 2.0

As a boy, he was rejected by his clan yet as an adult he clawed his way to power, coming to believe he was destined to rule the world. And he all but succeeded, so writes Spencer Day in History today (click here), who says:
In the early 13th century, Wanyan Yongji, mighty emperor of the Jin, sent a message to an upstart warlord who had had the temerity to invade his territory. “Our empire is as vast as the sea,” it read. “Yours is but a handful of sand. How can we fear you?” It was a bold statement, but one that was, on the face of it at least, fully justified. For the Jin dynasty of northern China was perhaps the most powerful polity on the face of the Earth at the time. The Jin had unimaginable wealth, gunpowder and an enormous army equipped with state-of-the-art weaponry, such as catapults. What’s more, they could call upon the protection of one of the foremost engineering feats of all time, the Great Wall of China. So why should they be concerned about a nomad army riding roughshod over their land? But there were a couple of problems.

The Jin weren’t facing any old bunch of nomads, and the man commanding them wasn’t any old leader. He was Genghis Khan.

Who was Genghis Khan?
Genghis Khan (born Temüjin Borjigin) c. 1155 – c. 1162 to 18th August 1227), also named officially Genghis Huangdi, was the founder and first Great Khan and Emperor of the Mongol Empire. It became the largest contiguous empire in history after his death. He came to power by uniting many of the nomadic tribes of Northeast Asia. After founding the Empire and being proclaimed Genghis Khan (meaning ‘Universal, oceanic, and firm/strong ruler and lord’), he launched the Mongol invasions that conquered most of Eurasia, reaching as far west as Poland and the Levant in the Middle East.

Campaigns initiated in his lifetime include those against the Qara Khitai, Khwarezmia, and the Western Xia and Jin dynasties, and raids into Medieval Georgia, the Kievan Rus’, and Volga Bulgaria.

These campaigns were often accompanied by large-scale massacres of the civilian populations. Because of this brutality, which left millions of humans dead in his pursuit of power, Genghis Khan is considered by many to have been a brutal ruler. By the end of his life, the Mongol Empire occupied a substantial portion of Central Asia and China. Due to his exceptional military successes, Genghis Khan is often considered to be the greatest conqueror of all time.

Beyond his military accomplishments, Genghis Khan also advanced the Mongol Empire in other ways. He decreed the adoption of the Uyghur script as the Mongol Empire’s writing system. He also practised meritocracy and encouraged religious tolerance in the Mongol Empire, unifying the nomadic tribes of Northeast Asia. Present-day Mongolians regard him as the founding father of Mongolia. He is also credited with bringing the Silk Road under one cohesive political environment. This brought relatively easy communication and trade between Northeast Asia, Muslim Southwest Asia, and Christian Europe, expanding the cultural horizons of all three areas.

The Secret History of the Mongols
Genghis Khan’s birth name was Temüjin, a word derived from the Mongol word temür meaning “of iron” and  jin denoting agency, and together mean Temüjin meaning “blacksmith”.

You can read about The Secret History in the book titled: The Secret History of the Mongols: The Life and Times of Chinggis Khan (Note the spelling of Genghis) available at Amazon at: https://www.amazon.co.uk/Secret-History-Mongols-Times-Chinggis/dp/0415515262/

Why it ended…
In 1206, Genghis Khan, a fierce tribal chieftain from northern Mongolia, began to take over the world. His ruthless tactics and loyal horde swept across Asia, and one territory after another fell under the overwhelming force of the Mongol Empire, which would eventually stretch from the eastern shores of China. A series of successful forays in Hungary and Poland made even Europe seem within reach of conquering.  By the year 1240, my paternal grandfather’s home city, Kiev (now capital of modern-day Ukraine), had been sacked. But this unstoppable wave of victories in Europe suddenly ended. Almost as soon as the Mongols set their sights set on Austria, they abruptly returned to Asia. You need to go to https://www.sciencealert.com/scientists-finally-know-what-stopped-mongol-hordes-from-conquering-europe to find out why. It’s very interesting indeed…