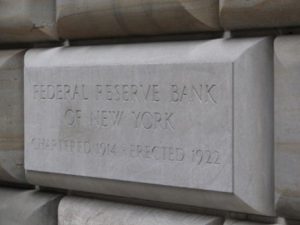 Picture Credit: “Federal Reserve Bank of New York Building” by epicharmus is licensed under CC BY 2.0

Started by the Panic of 1907 (1)
In 1907 there was a serious financial crisis in the U.S. – the Panic of 1907 or 1907 Bankers’ Panic or Knickerbocker Crisis occurred over a three-week period starting in mid-October 1907 when the New York Stock Exchange fell almost 50% from its peak the previous year. Panic occurred (it was a time of economic recession), and there were numerous runs on banks and trust companies. The panic eventually spread throughout the nation when many state and local banks and businesses entered bankruptcy. Primary causes of the run included a retraction of market liquidity by a number of New York City banks and a loss of confidence among depositors, exacerbated by unregulated side bets at bucket shops.

The Secret Meeting on Jekyll Island (2)
In November 1910, six men – Nelson Aldrich, A. Piatt Andrew, Henry Davison, Arthur Shelton, Frank Vanderlip and Paul Warburg – met at the Jekyll Island Club, off the coast of Georgia, to write a plan to reform the banking system in the US. The group referred to themselves as the “First Name Club”.

The meeting and its purpose were closely guarded secrets, and participants did not admit that the meeting occurred until the 1930s. But the plan written on Jekyll Island laid a foundation for what would eventually be the Federal Reserve System.

The Approval
Despite the warnings (see below), on 23rd December 1913 the Federal Reserve Act, was signed into law by President Woodrow Wilson. It gave the 12 Federal Reserve banks the ability to print money to ensure economic stability. It created the dual mandate to maximize employment and keep inflation low and was created by Congress to provide the nation with a safer, more flexible, and more stable monetary and financial system. The panic of 1907, and at the urging of J.P. Morgan and other prominent financiers, Congress eventually established the ‘Fed’ as America’s central bank – just two days before Christmas, between the hours of 1:30 A.M. and 4:30 A.M., when much of Congress was either sleeping or at home with their families before the 1913 Christmas holidays, The Federal Reserve Act of 1913 was voted on and passed through the Senate.

The Warnings
“If the American people ever allow private banks to control the issue of their currency, first by inflation, then by deflation, the banks and corporations that will grow up around them will deprive the people of all property until their children wake up homeless on the continent their Fathers conquered… I believe that banking institutions are more dangerous to our liberties than standing armies… The issuing power should be taken from the banks and restored to the people, to whom it properly belongs.” Thomas Jefferson

“History records that the money changers have used every form of abuse, intrigue, deceit, and violent means possible to maintain their control over governments by controlling money and its issuance.” James Madison

“If Congress has the right under the constitution to issue paper money, it was given them to be used by themselves, not to be delegated to individuals or corporations.” Andrew Jackson

“The government should create, issue, and circulate all the currency and credit needed to satisfy the spending power of the government and the buying power of consumers. Money will cease to be master and will then become a servant of humanity.” Abraham Lincoln

The Regrets
A few years after he signed the Federal Reserve Act into law, Woodrow Wilson reflected:

“I am a most unhappy man. I have unwittingly ruined my country. A great industrial nation is controlled by its system of credit. Our system of credit is concentrated. The growth of the nation, therefore, and all our activities are in the hands of a few men. We have come to be one of the worst ruled, one of the most completely controlled and dominated governments in the civilized world no longer a Government by free opinion, no longer a Government by conviction and the vote of the majority, but a Government by the opinion and duress of a small group of dominant men.”

The Book to read: The Creature from Jekyll Island (3)
In this book. we get a close look at their mirrors and smoke machines, their pulleys, cogs, and wheels that create the grand illusion called money. A dry and boring subject? Just wait! You’ll be hooked in five minutes. Reads like a detective story – which it really is. But it’s all true. This book is about the most blatant scam of all history. It’s all here: the cause of wars, boom-bust cycles, inflation, depression, prosperity. The Creature from Jekyll Island is a “must-read.” Your worldview will definitely change. You may never trust a politician again – or a banker.

Startling fact (5)
Take a look at this YouTube video (here) and you’ll learn that the Fed isn’t Federal, it has no reserves and it’s not even a Bank. The Fed is privately owned by a secret group of international bankers.

My Blog
I posted a blog on this subject in 2014. You can read it at: https://onesmartplace.com/banks-nab-400b-in-usts-for-window-dressing/

References
(1) https://en.wikipedia.org/wiki/Panic_of_1907
(2) https://www.federalreservehistory.org/essays/jekyll_island_conference and https://www.amazon.com/Creature-Jekyll-Island-Federal-Reserve/dp/091298645X
(3) Source: Amazon describing the book: A Second Look at the Federal Reserve
(4) The Bank War was the name given to the campaign begun by President Andrew Jackson in 1833 to destroy the Second Bank of the United States, after his re-election convinced him that his opposition to
the bank had won national support.
(5) https://youtu.be/lu_VqX6J93k