The Bridge of San Luis Rey

I see that The Bridge of San Luis Rey (Penguin Modern Classics) was published in paperback on 27th July 2020 and is available from Amazon, here.

The book was American author Thornton Wilder’s second novel, first published in 1927 to worldwide acclaim. It tells the story of several interrelated people who die in the collapse of an Inca rope bridge in Peru, and the events that lead up to their being on the bridge.  In the story, a priest tries to find the connection between the five people killed by the unexpected collapse of the Bridge of San Luis Rey (on 20th July 1714) and his faith in God. For his efforts to see a link between the character of a person and the sudden, premature death brought on by calamity, he is burned at the stake for heresy.

The book won the 1928 Pulitzer Prize for the Novel, and remains widely acclaimed as Wilder’s most famous work.

In 2004, the company for which my role was Operations Director, financed and produced the film based on the book. The film was directed by Mary McGuckian and had a stellar cast including: F. Murray Abraham, Kathy Bates, Gabriel Byrne, Geraldine Chaplin, Robert De Niro and Harvey Keitel. 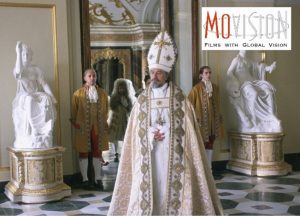