There been a lot written about the Cloud but some other interesting news too.

Picture tomorrow’s workday in the Cloud 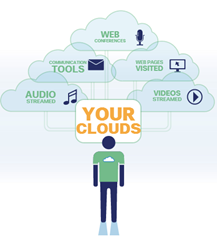 I found this website by accident and it won my prize of the day.  It says that global traffic generated by cloud computing services will increase 12-fold by 2015 compared with cloud traffic in 2010, while data centre traffic will increase four times by 2015.

Regardless of your impact, your world tomorrow will not be served by one giant cloud. Each business and individual will choose different cloud solutions: Some will build private clouds; others will build public clouds; some will prefer hybrid solutions; others will utilize cloud services to create a world of many clouds. By 2015, we will create the data equivalent of 92.5 million Libraries of Congress in one year (that’s a lot of books!).

In less than two years’ time, the amount of business done in the cloud will grow exponentially. So, what does your cloud future look like?

Are you prepared?  You can find out when you use this free assessment tool which can help build your cloud vision today.

Access “The cloud: Too much (or Too Little) of a Good Thing?” 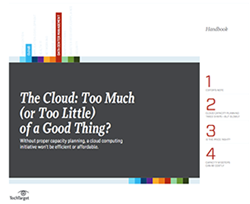 The searchcloudcomputing.techtarget.com website says that one of the major benefits of cloud services is efficiency. Without proper cloud capacity management, however, companies can miss out on that benefit.

A free handbook is being promoted which includes best practices on how to avoid provisioning too many or too few resources; it also provides guidance on how to address cost concerns with respect to cloud capacity.

On the searchcloudcomputing.techtarget.com website there’s an article which tells us that the best cloud management software product winner is Dell Cloud Manager.

As cloud services mature, improved performance, lower costs and fewer outages are enticing enterprises to the cloud. However, not all cloud providers offer exactly what your enterprise needs when it comes to building, monitoring and managing a private cloud infrastructure or hybrid cloud deployment. To fill that void, many IT pros turn to third-party cloud management software. 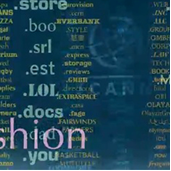 This week, Web users will get to stake their claim on website names for seven new domains, the first of many to be introduced in 2014.  Donuts Inc., a generic top-level domain (gTLDs) registry, went live with seven new domains this week: .bike, .clothing, .guru, .holdings, .plumbing, .singles, and .ventures. Going forward, Web users can now register names on these domains – like tech.guru or womens.clothing.

“This is a unique opportunity for businesses, brands, organizations, and individuals to find an online identity that speaks precisely to their products, services, and interests,” Donuts CEO Paul Stahura said in a statement.

New domains will roll out on a weekly basis this year. On 5 February for example, Donuts will launch .camera, .equipment, .estate, .gallery, .graphics, .lighting, and .photography.

The article on pcmag.com says that before this week, there were 22 gTLDs, including .com, .org, and .net. In June 2011, however, the Internet Corporation for Assigned Names and Numbers (ICANN) approved a plan that would allow people to apply for new gTLDs, like .pcmag, for example. The application process closed in May 2012, and officials started sorting through the submissions. Last year, ICANN said the rollout of hundreds of new Web address suffixes was expected by mid-2013, and that started in October with the rollout of domains in Arabic, Chinese, and Cyrillic scripts. Now, the rollout of domains in the Latin alphabet begin.

Web users interested in learning more about purchasing new and existing domain names can find details online. If multiple people request the same domain name, it may be auctioned to those who have pre-registered, according to Web.com.

There’s another story (on Wednesday) about Dell on pcmag.com which informs us that Dell’s long-promised, cloud-tapping, enterprise-computing-environment-on-a-stick is finally here.

I have to confess I wasn’t aware of this.

Del has announced the general availability of the Dell Wyse Cloud Connect dongle, first unveiled way back in January 2013 with the code name Project Ophelia. Dell Wyse Cloud Connect devices are priced at $129 per unit and plug into any compatible monitor to deliver access to the desktops, data, apps, and corporate networks used by business users. The upshot is that the dongle, which runs a hardened version of Android, offers access to those assets and data from virtually anywhere a user can plug it in, whether it’s the corporate office, home office, or on the road.

Armed with the Cloud Connect device, enterprise users can tap into their own desktops and secure corporate networks, he said, provided they have a Citrix, Microsoft, or VMware back-end, of course

I’m off to buy one straightaway!