Are there lessons to be learnt from 1995 Quebec campaign?

But before doing so, read (or listen to) what Walt Disney’s Cinderella said way back in 1950, in a song written and composed by Mack David, Al Hoffman and Jerry Livingston as she tried to encourage her animal friends to never stop dreaming: 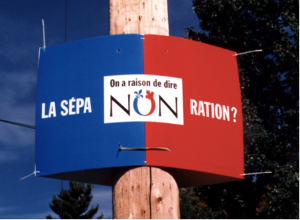 A work colleague, David Seidel, who is both a Canadian and British lawyer, told me that the Scottish Independence debate is déjà vu all over again. Both sides in the increasingly tense Scottish referendum battle are learning lessons and drawing encouragement from the dramatic twists of the 1995 campaign over whether Quebec should break away from Canada. Back then, Quebec also dreamt of independence.

As in Britain today, in 1995 the No camp in Quebec had fought a largely negative battle, focusing heavily on financial arguments and consequences. The No camp made sure that Canada’s Prime Minister (Jean Chrétien who was unpopular in Quebec), kept his head well down from the parapet. The Yes campaign headed by Lucien Bouchard appeared to be gaining unstoppable momentum. As polls suggested Quebec was heading for independence, the No campaign took last-ditch action. Canadians from all over the country travelled to Montreal, the province’s largest city. They appealed for Quebec to remain in their family, while Mr Chrétien promised constitutional reforms to recognise the province’s unique status.

This week, several banks and others based in Scotland announced that if there were a Yes victory, they would move their headquarters from Edinburgh to London. 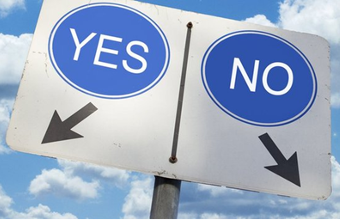 In 1995, with two weeks to go before the Quebec referendum, the healthy lead for No had collapsed and polls began to suggest that the mainly French-speaking province would go it alone and secure the independence they campaigned for. There were dramatic last-minute steps to keep the Canadian nation together. The same happened on Wednesday of this week, when Westminster’s main parties were campaigning in Scotland arguing: “we’re stronger together”.

Quebec has tried twice for independence (1980 and 1995) and on both occasions, the No vote prevailed. But only just. Although the final poll in 1995 before the referendum vote showed a seven-point lead in favour of independence, people in Quebec voted by a tiny margin – 50.6 per cent to 49.2 per cent – to remain Canadians. The Yes vote was defeated.

We know that Scotland tried for financial independence before: in 1695 (read my article this week on the Daren disaster) and that didn’t work out. Poor planning you might say. Or the Spanish were too strong for the Scots in Panama. Or that the Scots had too little money to succeed in their ambitious endeavour. We will never know.

I’m not saying that Scottish independence is good or bad. There’s no harm in dreaming. Dreams are OK in my book but you need proper plans and strategies if they are to become a reality. It’s no good having a dream without first putting together all the details on how you achieve what you desire and what you need to do if and when you wake up to reality.