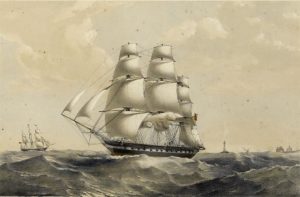 Have you heard the story about a merchant ship laden with cargo, gold and people – it disappeared after sailing from Melbourne Australia, never to be seen again…

The story appeared on 12th August 2020, (here) by Ray Setterfield about something that happened in 1853.

On 12th August 1853, the frigate Madagascar left Melbourne for London carrying more than 150 passengers and crew. She also had nearly three tons of gold on board. Both the ship and her passengers and cargo were never seen again.

Madagascar was a large British merchant ship built for the trade to India and China in 1837.  The disappearance of Madagascar is one of the great maritime mysteries of the 19th century and has probably been the subject of more speculation than any other 19th-century maritime puzzle, except for the Mary Celeste.

Madagascar carried freight, passengers, and troops between England and India until the end of 1852. In addition to her normal crew, she also carried many boys in training as officers for the merchant marine. Known as midshipmen from naval practice, their parents or guardians paid for their training, and they only received a nominal wage of usually a shilling (5 new pence) a month.

Wikipedia, here, adds to the story: due to the Victorian Gold Rush, Madagascar, under the command of Captain Fortescue William Harris, was sent to Melbourne with emigrants. She left Plymouth on 11 March 1853 and, after an uneventful passage of 87 days, reached Melbourne on 10th June that year. Fourteen of her 60 crew jumped ship for the gold diggings, and it is believed only about three replacements were signed on. She then loaded a cargo that included wool, rice, and about two tonnes of gold (other accounts say it was nearly three tonnes) valued then at £240,000 and took on board about 110 passengers bound for London. Most passengers paid £43 for a cabin, with a select few stumping up £84 for a first-class berth.

On Wednesday 10th August 1853, just as she was preparing to sail, police went on board and arrested a bushranger John Francis, who was later found to have been one of those responsible for robbing in the previous month, the Melbourne Private Escort between the McIvor goldfield (Heathcote, Victoria) and Kyneton. On the following day, the police arrested two others, one on board the ship and the other as he was preparing to board. As a result of these arrests Madagascar did not leave Melbourne until Friday 12th August 1853. After she left Port Phillip Heads, the Madagascar was never seen again.

When the ship became overdue many theories were floated, including spontaneous combustion of the wool cargo, hitting an iceberg and, most controversially, being seized by criminal elements of the passengers and/or crew and scuttled, with the gold being stolen and the remaining passengers and crew murdered.

In 1872, rumours of a supposed death-bed confession by a man who “knew who murdered the captain of the Madagascar” were first published. Over the next century many purely fictional stories based on this rumour have been published (being mentioned by authors of such reputation as Basil Lubbock and James A. Michener). Most 20th century versions state that the deathbed confession was by a woman passenger who was taken by the mutineers, and by implication raped, and was too ashamed of what had happened to her to confess beforehand.

The legend of Madagascar and her fate has also been used many times as a plot device in popular fiction, the earliest known being in Frank Fowler’s Adrift; or The Rock in the South Atlantic in 1861 (which is probably the foundation of the modern mutiny legends), and later in Thomas Harrison’s My Story; or, the Fate of the “Madagascar“, first published as a serial in The Colonial Magazine, Melbourne, in 1868. It probably influenced many other gold-rush era sea stories including Clark Russell’s The Tale of Ten: A Salt Water Romance in 1896, and the alleged loss of the Starry Crown—reported as fact in T. C. Bridges’ The Romance of Buried Treasure in 1931—which was in turn used in 1949 by Captain W. E. Johns in Biggles Breaks the Silence. The most recent use of the mystery in a fictional setting is probably Sandy Curtis’s Deadly Tide (Pan Macmillan Australia Pty Ltd., 2003, ISBN 0-33036398-0).