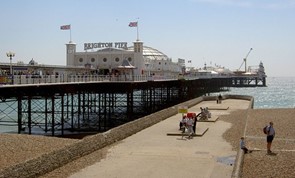 Picture Credit: [Cropped] “Brighton Palace Pier” by jameswragg is licensed under CC BY 2.0

Piers of Sussex does not mean Piers Morgan, but you can look him up if you want at: https://en.m.wikipedia.org/wiki/Piers_Morgan – admittedly, his name is Piers and he lives in East Sussex, (Newick) but Piers Morgan is an English broadcaster, journalist, writer, and television personality whereas this article is about the elegant structures that allow people to walk over water, well almost. Piers provide glamour and fun at the great British seaside and add a unique charm and nostalgia to our promenades and sea-fronts. The East Sussex coastline is fortunate enough to have three fine Victorian piers together with what remains of the wrecked West Pier in Brighton. In total there are 6 Sussex Piers which, in alphabetical order, are:

The pier at Bognor is not listed above. Barely a tenth of its original length remains and it has suffered badly over the years. Nevertheless, it has a Grade II listing.

Although Sussex is probably the birthplace of the seaside pleasure pier, Ryde Pier on the Isle of Wight has the earliest origins as a pier. The dear departed and famous Chain Pier at Brighton was the first to be used as a fashionable promenade. Its full name was The Royal Suspension Chain Pier and it was the first major pier built in Brighton (1823), but was destroyed during a storm on 4th December 1896. From the 1860s until about 1910, a succession of piers were built along the Sussex coast from Littlehampton to Hastings.  In their heyday, they were the place to be seen. Magnus Volk, an inventor and pioneering electrical engineer, and a resident of Brighton, built a ‘moving pier’ affectionately known as the ‘Daddy-long-legs’. He is most notable for having built Volk’s Electric Railway, the world’s oldest operating electric railway, on the Brighton seafront.

Here’s a quick round-up of three of the Piers along our coast:

Brighton Palace Pier
The Palace Pier opened in 1899 and was the third pier to be constructed in Brighton following The Royal Suspension Chain Pier and the West Pier. After opening, it quickly became popular, and by 1911 it had become a frequently visited theatre and entertainment venue. It has been featured in many works of British culture, including the gangster thriller Brighton Rock, the comedy Carry On at Your Convenience and the Who’s concept album and film Quadrophenia. During World War II, the pier was closed as a security precaution. A section of decking was removed in order to prevent access from an enemy landing. The pier regained its popularity after the war, and continued to run regular summer shows, including Tommy Trinder, Doris and Elsie Waters and Dick Emery.

Worthing Pier
By 1894 a steamship began operation between Worthing Pier and the Chain Pier in Brighton, twelve miles to the east. The first moving picture show in Worthing was seen on the pier on 31st August 1896 and is commemorated today by a blue plaque. In March 1913, on Easter Monday, the pier was damaged in a storm, with only the southern end remaining, completely cut off from land. Later, it was affectionately named ‘Easter Island’. A rebuilt pier was opened on 29th May 1914. Then in September 1933 the pier and all but the northern pavilion were destroyed by fire. Two years later, the remodelled Streamline Moderne pier was opened, and it is this that remains today.

Worthing Pier was sectioned in 1940 for fear of German invasion after the British retreat at Dunkirk. Army engineers used explosives to blow a 120ft. hole in the pier to prevent it from being used as a possible landing stage in the event of an invasion.  In 2006 and again in 2019. Worthing Pier was judged to be the Pier of the Year by the National Piers Society. It is a Grade II listed building structure.

Eastbourne Pier
Eastbourne Pier, one of the finest examples of a Victorian pier,  opened in 1872 and is a sought after film and TV location used in Angus Thongs & Perfect Snogging, and TV series including Poirot, A Place in the Sun, Art Attack, Flog It, and BBC CCTV.

On New Year’s Day 1877, the landward half was swept away in a storm. It was rebuilt at a higher level, creating a drop towards the end of the pier. The pier is effectively built on stilts that rest in cups on the sea-bed allowing the whole structure to move during rough weather. It is roughly 300 metres (1000 ft) long.  A domed 400-seater pavilion was constructed in 1888.  A 1000-seater theatre, bar, camera obscura and office suite replaced this in 1899/1901.  At the same time, two saloons were built midway along the pier.  The camera obscura fell into disuse in the 1960s but was restored in 2003 with a new stairway built to provide access.

Paddle steamers (such as the PS Brighton Queen and the PS Devonia) ran trips from the pier along the south coast and across the Channel to Boulogne from 1906 until the outbreak of the Second World War II. Although they were resumed after the war, the paddle steamers were gradually withdrawn from service.

Various traditional pier theatres were built over the years but after the last one was destroyed by fire in 1970, it was replaced by a nightclub and bar which remain to this day. During World War II, part of the decking was removed, and machine guns were installed in the theatre providing a useful point from which to repel any attempted enemy landings.

What the Butler saw… 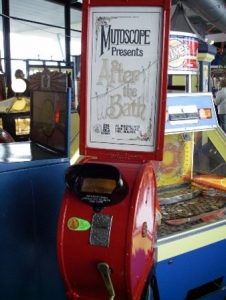 In earlier days, no self-respecting pier would be complete without a peep-show machine such as this. By depositing a penny coin (old money) in the slot, those who wanted to do so could view ‘naughty’ films. Tut Tut!

Picture Credit: “What The Butler Saw” by the justified sinner is licensed under CC BY-NC-SA 2.0