Mystery of the SS Ourang Medan 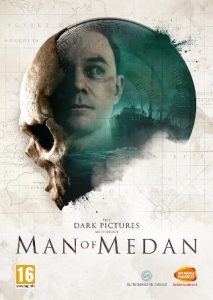 Picture Credit: “The-Dark-Pictures-Man-Of-Medan-220519-008” by instacodez is marked with CC PDM 1.0 [A video game inspired by the mystery of the SS Ourang Medan was developed by Supermassive Games.]

Did a mysterious tragedy occur on the SS Ourang Medan or is it all just a legend? Is it fact or fiction?

In June 1947, several ships travelling trade routes in the Strait of Malacca, off the coast of Malaysia, received a terrifying SOS message that read: “All officers including captain are dead lying in chartroom and bridge. Possibly whole crew dead.” After a short period of time, one final message was received, which read simply … “I die.”

Nearby ships identified the source of the signal as coming from a Dutch freighter, the SS Ourang Medan. The nearest merchant ship, The Silver Star, travelled as fast as they could to the source of the distress signal. Onboarding the Ourang Medan, they were horrified to find every member of the crew dead, their corpses scattered over the decks. The eyes of the men were still open, and expressions of sheer terror were frozen on their faces. Even the ship’s dog was dead, its once intimidating snarl frozen into a ghastly and ghostly grimace. The Silver Star’s party found the deceased radio operator as well, his hand still on the Morse keys, and his eyes wide open, even in death.

But strangely, there were no signs of wounds or injuries on any of the bodies. The Silver Star’s crew decided to tow the ship back to port, but before they could get underway, smoke began emanating from the decks below.

The boarding party quickly returned to their ship and barely had time to escape before the SS Ourang Medan exploded and swiftly sank. Some theorised that clouds of noxious natural gases bubbled up from fissures in the seabed and engulfed the ship, and others have even blamed the occurrence on the supernatural, but to this day, the exact fate of the ship’s crew remains a mystery.

Wikipedia (https://en.wikipedia.org/wiki/Ourang_Medan) casts some doubt on some of the foregoing.  It says the SS Ourang Medan became a shipwreck in Dutch East Indies (modern Indonesia) waters, or elsewhere, after its entire crew had died under suspicious circumstances, either in 1940, 1947 or 1948, depending on the newspaper source. The story of the Ourang Medan has, to some degree, become a legend.

A survivor, before perishing himself, told a missionary that the ship was carrying a badly stowed cargo of sulphuric acid and that most of the crew perished because of the poisonous fumes escaping from broken containers.

According to his story, the SS Ourang Medan was sailing from an unnamed small Chinese port to Costa Rica and deliberately avoided the authorities.  The survivor, an unnamed German, died after telling his story to the missionary, who told the story to the author, Silvio Scherli of Trieste, Italy.

There are many theories as to what actually happened. It was suggested the ship might have been involved in smuggling operations of chemical substances such as a combination of potassium cyanide and nitro-glycerine or even wartime stocks of nerve agents. According to these theories, seawater would have entered the ship’s hold, reacting with the cargo to release toxic gases, which then caused the crew to succumb to asphyxia and/or poisoning. Later, the seawater would have reacted with the nitro-glycerine, causing the reported fire and explosion.

Another theory is that the ship was transporting nerve gas which the Japanese military had been storing in China during World War II and which was handed over to the US military at the end of the war. No US ship could transport it as it would leave a paper trail. It was therefore loaded onto a non-registered ship for transport to the US or an island in the Pacific.

In Conclusion
At the end of an article at https://www.historicmysteries.com/ourang-medan/, Les Hewitt asks:
Was the tragedy on the SS Ourang Medan a genuine event or just a mariner’s seafaring tale designed to scare, frighten, or dissuade?

Author James Donahue at https://www.perdurabo10.net/ourang-medan.html# wrote that Naval historian Roy Bainton conducted exhaustive research on this “death ship” story.  After turning to Lloyd’s Shipping registers, the Dutch Shipping records and even places like the Maritime Authority in Singapore, he was about to conclude that the Ourang Medan story was nothing more than an old sailor’s yarn. Then Bainton found a German booklet titled “Death Ship in the South Sea” by Otto Mielke, which gave details about the SS Ourang Medan, its route, cargo, tonnage and even the name of the captain.  Bainton wrote that Mielke’s booklet suggested that the Number 4 hold of the fated ship was filled with “a mixed, lethal cargo on the Dutchman ‘Zyankali’ (potassium cyanide) and nitro-glycerine.

Your guess as to what really happened is probably as good as mine. Perhaps better. What do you think? Was there a conspiracy at play? Something to do with the end of the war? It’s odd that there doesn’t seem to be any official records that the ship ever existed in the first place, yet the Silver Star found it…