Somehow, you wouldn’t naturally expect Ricky Gervais to say something as profound as this. But then, I don’t know him. I know a little of him but that’s not the same.

I’m interested in psychology. So much so that it formed a large part of my MBA studies in the late 1990s.  Something on introversion caught my eye in the last few days and in this article I share with you what I found. According to many theories of personality (and there seem to be many of them), everyone has some degree of both introversion and extroversion but people often tend to lean one way or the other.

Are you an Introvert? 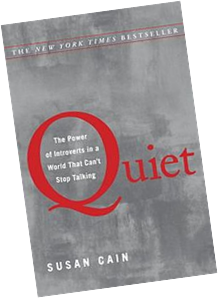 I came across a very successful and insightful writer the other day – Susan Cain, best-selling author of Quiet. On her website, she asks visitors:  “What are your greatest character strengths?”  To find out, I took her quiz at www.thepowerofintroverts.com and apparently, I am an introvert.

I already knew that from a Myers Briggs test I took when I did my MBA. Look up Myers Briggs here. Actually, the test I took in 1998 was the Jung Typology Test™ – it delivers a 4-letter type formula according to Carl Jung’s and Isabel Briggs Myers’ typology, along with the strengths of preferences and the description of your personality type. The Myers-Briggs Type Indicator (MBTI) assessment is a psychometric questionnaire designed to measure psychological preferences in how people perceive the world and make decisions. If you can’t wait a minute more to know your personality type, go to www.humanmetrics.com, take the test and a few minutes later you’ll know more about yourself.

Back to Susan Cain’s book – it is titled “Quiet: The Power of Introverts in a World That Can’t Stop Talking” and is a best seller. From her earlier career as a corporate lawyer and negotiations consultant, before becoming a writer, you might guess that she’s an extrovert person, when in fact she’s says she is just the opposite.

Bill Gates loves listening to her when she talks. And he is not alone – she’s a very accomplished speaker. You can listen to her here.

Susan Cain argues that introverts bring extraordinary talents and abilities to the world, and should be encouraged and celebrated. Interestingly, she says that there is absolutely no correlation between being the best talker and having the best ideas.

I’m waiting for her book to arrive from Amazon but in the meanwhile I’ve done some research on introverts. Some of the world’s top inventors and technologists are introverts. Among them are Bill Gates, Larry Page (founder of Google) and Steve Wozniak (Apple founder) are all introverts as was Albert Einstein. In fact, it’s estimated that one third to one half of the population are introverts – read about it here.

The list of introverts is long and impressive includes some surprises: J.K. Rowling, Abraham Lincoln, Warren Buffett, Mahatma Ghandi and Al Gore. Show business has its own hall of famous introverts: Woody Allen, Marilyn Monroe, Gwyneth Paltrow, Roy Rogers and even Lady Gaga are among them.

The book, “Quiet”, looks at introverts, whose traits of to be about calmness, peace, tranquility, thinking and listening, not shouting or being noisy. Whereas extroverts crave more stimulation in order to feel at their highest level, introverts don’t talk unless they have something to say. They hate small talk. But they aren’t shy – they just need a good enough reason to interact with other people. They are comfortable with their own company and their own thoughts. Most of all, introverts are their own people – follow the crowd is not for them. They tend to be inward turning, focusing more on internal thoughts, feelings and moods rather than seeking out external stimulation. 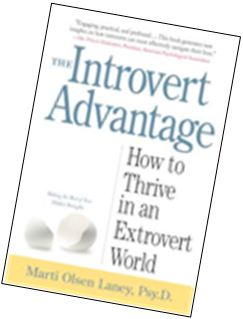 The Introvert Advantage, (another book ordered from Amazon this week), is written by Marti Olsen Laney. She dispels common myths about introverts—they’re not necessarily shy, aloof, or antisocial but they are thoughtful, imaginative, tend to work independently and think outside the box. Introverts are keen observers and sensitive listeners. Introverts prefer to be involved intimately with one person and are often drawn to life’s spiritual side. She says that there is a definite correlation between introversion and intelligence. She’s highly regarded and is one of America’s foremost authorities on introversion so she ought to know what she’s talking about.

Do a search on Amazon for “Introverts” and you’ll find a list as long as your arm. Most are written by Americans and most writers are women.

Two other books that look interesting are

In Introvert’s Way, Sophia Dembling says she is an introvert and declares: “There’s not a damned thing wrong with me.”  She says that the difference between extroverts and introverts is not that the former are good at socialising the latter aren’t. Or that introverts dislike people and extroverts never meet a stranger. Or that introverts don’t like e to talk while extroverts love a nice, long chat. A lot of people have the wrong idea about introversion and confuse it with shyness. She calls for introverts to unite making it quite clear that introversion is neither right nor wrong and vice versa, neither is extroversion. We are who we are and that is what makes the world interesting, she says.

The Waterstones review of Jennifer B. Kahnweiler’s book:  Quiet Influence: The Introvert’s Guide to Making a Difference says that introverts can be highly effective influencers when, instead of trying to act like extroverts, they use their natural strengths. The book shows how six specific introvert strengths can be used to influence others, but also warns of the pitfalls that can result if is these strengths are used in the wrong way.

There’s much more to personality traits that first appears. In most human relationships, appearance takes second place to personality.  As I wrote in 1998, what psychology boils down to is an understanding of the human mind and behaviour (although it applies equally to animals too). What’s interesting for me is how psychologists and others have applied this understanding towards dealing with and recognising human problems and behaviour (why people do what they do) – for example, studies in human behaviour in organisations of different sizes, maturity and cultural background.

Psychology isn’t to do with people with problems – it’s to do with people full stop. Psychology applies to the law, to business, to industry and to education because all people are engaged in all these areas. Psychological principles are applied every day in business and industry. For example, personnel selection, attitudes, motivation, supervision, communication and other factors influencing work efficiency are interesting and I’ve looked at them.