During the summer of 1997, I attended a seminar at Roffey Park Management Institute in Sussex as part of a Masters’ degree (MBA). The topics were wide and varied and offered an opportunity to think about management issues in a new light. One interesting idea concerned the role of music to enhance the effects of positive emotion – in other words, motivation. Motivation also plays a large part in the rationale of popular films. Take a good look at psychologist Abraham Maslow’s hierarchy of needs – if you understand them, you’ll understand much more about what motivates people. 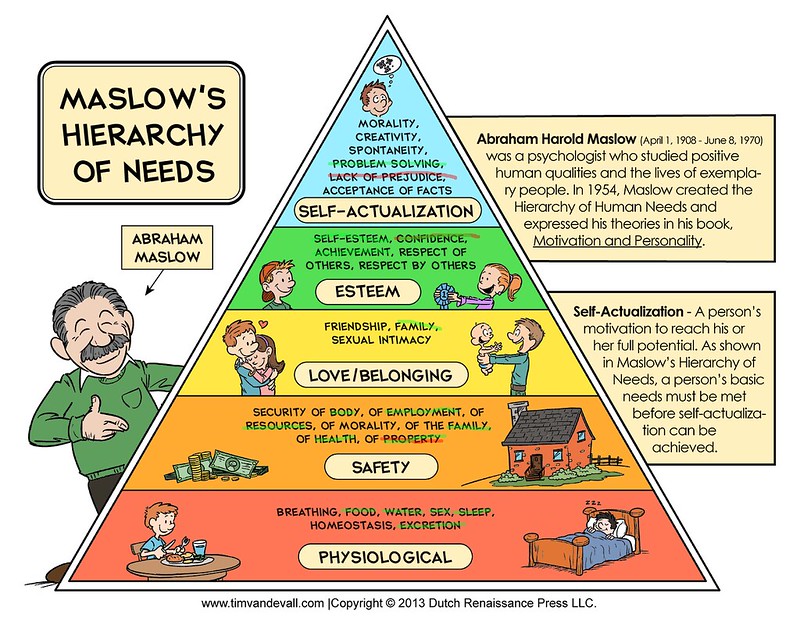 Picture Credit: “20150502 Maslows-Hierarchy-of-Needs” by cesarharada.com is licensed under CC BY-NC-SA 2.0

Because of direct connections with the brain, when information is linked to music there’s a good chance that the brain will encode it in its long-term storage system. Recollection of happy times and circumstances act as a stimulus for motivation. At the other end of the scale, absence of music can retard child brain development. One of the reasons that music affects learners is that the processing of music involves both sides of the brain.

Neuroscientist Gordon L. Shaw, PhD, of the MIND. Institute, University of California, says that music can entertain, motivate, inspire and calm.  Music lessons, and even simply listening to music, can enhance spatial reasoning performance, according to his research. Now, years of innovative scientific research prove that music can enhance how we can think and reason and show us how the brain works and how thought and reason can be enhanced by music.

Many feature films arouse emotions and contain profound messages of motivation. The desire for security is one of the primary motivations of characters in popular films – for example as Dorothy (Judy Garland) showed in The Wizard of Oz.  Her insecurity provides the motivation to find somewhere without problems but when she finds that Oz is a dangerous place, she’s soon motivated to return to the safety of her home.

Psychologist Abraham Maslow’s hierarchy of needs focuses ultimately on the person striving to attain “self-actualisation” (reaching their full potential). Maslow acknowledged that there need – lower, yet stronger – that must be satisfied before needs higher on the hierarchy are activated. After the basic physiological needs of hunger, thirst and sex, humans have a terrific need for personal safety.

Next on the Maslow’s hierarchy is the need for love and the feeling of belonging to a person or group. An example of this is in ET – The Extra-Terrestrial. Elliott (played by Henry Thomas), a lonely child abandoned by his father and excluded by his brother’s friends, finds friendship in his relationship with ET a visitor from another planet. These two lost souls find each other across the vastness of space and time. The film identifies with many childhood experiences: a broken family with a single parent and no positive role model, a child’s caring for a stray creature or pet, and homesickness.

After love and belonging, there’s the need for self-esteem and the need for esteem from others. These motivations are displayed by Marty (Michael J Fox) in Back to the Future – his humiliation and lack of self-esteem is based on his need to belong to a family he can be proud of.

Harrison Ford as Indiana Jones in Raiders of the Lost Ark searches for ancient and rare objects of historical value for his museum, a selfless act of motivation that produces good for the community.

In Home Alone, Kevin (Macaulay Culkin) needs his family to love him, but he also needs self-esteem because of his inability to take care of himself, and he needs to safeguard his home against burglars.

Nick Marshall (played by Mel Gibson) a Chicago advertising executive, gets a new outlook on life when an accident gives him the ability to read women’s minds in What Women Want. He soon realises that he can use it to good effect, especially when it comes to outwitting his new boss, Darcy Maguire (Helen Hunt). In spite of his best efforts to finesse Darcy, he soon finds himself falling in love with her and then understands what women want.

Many popular films are stories about characters with specific needs. Revenge is often used as the protagonist’s motivation in many films. It’s a powerful emotional force fixing direction towards a clear goal to achieve justice to counter an earlier injustice (often in the opening scene), which generates audience empathy for the character. This incident, along with the protagonist’s attempts to bring the perpetrators to justice, forms the foundation of his motivation.

In Batman, Bruce Wayne (played by Adam West) is driven by revenge to overcome his feelings of helplessness as a child while watching his parents being murdered.  Sam (Patrick Swayze) in Ghost needs to save the life of the woman he loves (Molly – played by Demi Moore) and the friend that has helped him Oda Mae (Whoopi Goldberg). Molly needs Sam’s love and doesn’t want to let him go. In Beverley Hills Cops, Eddie Murphy playing Axel Foley wants to find who murdered his friend, Mike Tandino.

Revenge is also the motivation for Andy Dufrene (Tim Robbins) in The Shawshank Redemption who has been wrongly imprisoned for the murder he didn’t commit of his wife and her golf-club lover. Prison Warden Norton uses Andy to run his financial scam empire. But Andy gets his own back – the Warden’s money, shoes and respect disappear down the dank hole Andy uses to escape to Mexico. Red Redding (Morgan Freeman), another Shawshank inmate, achieves self-actualisation in being able to make it on the outside with Andy’s help – even after 40 years of imprisonment.

What can we learn from all this?
Motivation is a very complex thing. It can mean different things to different people at different times. And its impact can be different too.

Only by understanding the need can it be satisfied. It’s that way in business too – that’s why psychology plays such a big part in marketing and sales. Take a good look at Abraham Maslow’s hierarchy of needs – if you understand them, you’ll understand much more about what motivates people.