Lean Six Sigma: how could it transform your firm? 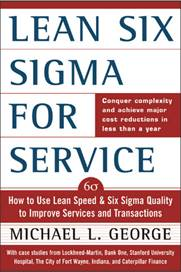 Lean manufacturing, lean enterprise, or lean production, is often simply referred to as “lean”. It is a production practice that considers the expenditure of resources for any goal other than the creation of value for the end customer to be wasteful, and thus a target for elimination.

The term Six Sigma is statistically based on the provision of goods and service at a rate of 3.4 defects per million opportunities (DPMO). A business finds out how to make something that is 99.999660% perfect and then designs processes so that the only way something can be made is that (near perfect) way.

The Lean Six Sigma concepts were first published in the book titled Lean Six Sigma: Combining Six Sigma with Lean Speed by Michael George and Peter Vincent in 2002.  Michael George has since written Lean Six Sigma for Service: How to Use Lean Speed and Six Sigma Quality to Improve Services and Transactions. This is interesting because many people have suggested that Six Sigma can apply to production activities but not to services. How untrue that it is when you look at the work of leading US lawyers Seyfarth (see below).

Lean Six Sigma uses the DMAIC phases similar to that of Six Sigma. DMAIC is an abbreviation for Define, Measure, Analyse, Improve and Control and refers to a data-driven improvement cycle used for improving, optimising and stabilising business processes and designs.

The DMAIC improvement cycle is the core tool used to drive Six Sigma projects but it is not exclusive to Six Sigma and can be used as the framework for other improvement applications.

The British Quality foundation describes it as:

“Lean Six Sigma is a set of powerful tools and techniques that will help any organisation to improve its efficiency and productivity. Although they originated in manufacturing environments, their principles can be applied to businesses operating in any sector.”

Seyfarth Shaw LLP is an international AmLaw 100 law firm headquartered in Chicago, Illinois. Founded in Chicago in 1945 the firm originally achieved national prominence for its work in the area of labour and employment law. Today, the firm’s clients include over 300 of the Fortune 500 companies, and its practice reflects virtually every industry and segment of the economy. Seyfarth Shaw has been recognised as one of the most innovative law firms in the USA for its implementation of “Seyfarth Lean”, a unique client service model – see description below.

Seyfarth was also named among the top five law firms in BTI Consulting Group’s 2013 “Client Service A-Team” ranking, which identifies the top law firms for client service through a national survey of corporate counsel. The firm has 13 offices with more than 800 attorneys in the U.S., London, Shanghai, Melbourne and Sydney. They are a giant law firm by any standards and operate on the world stage.

Seyfarth Shaw say that one of the biggest challenges facing the legal services market today is the need to develop a common definition of “value” between law firms and their clients. The heightened emphasis on value may be a relatively new development, but the issue itself is not new. At Seyfarth, they are continuously looking for better ways to meet clients’ needs for value and efficiency, while maintaining high quality with legal services. Based on that goal, they have become the only large law firm to build a distinctive client service model—called SeyfarthLean—that combines the core principles of Lean Six Sigma with robust technology, knowledge management, process management techniques, alternative fee structures and practical tools.  The broad, systemic use of such a model across multiple practice areas is unique to the legal profession and reflects a fundamentally different approach to delivering legal services. This approach 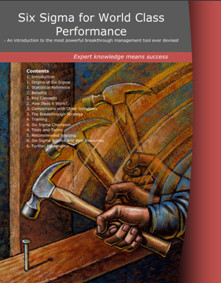 manifests itself with tangible processes and special tools, as well as the more intangible and fundamentally different way of thinking about how to deliver legal services.

Can you apply this thinking to your law firm or accounting practice? Very possibly.

You can learn more about SeyfarthLean here. Look up Seyfarth Shaw here.

If you would like to know more about Lean Six Sigma for Service, then a visit to the Amazon bookshop and a couple of clicks later will do the trick for you and your book order will be on its way.

And if you’d like a free publication on Six Sigma itself, email me at mpollins@bizezia.com and I’ll send you the publication I wrote some time ago.