Just a third of SMEs use advertising 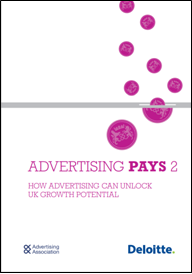 Did you know that the return on advertising investment made by small and medium sized businesses (SMEs) is eight times that of large companies – that is according to a report by the Advertising Association?

The Business Secretary Vince Cable, who seems to know a lot about everything and is one of the respected members of the Coalition has something to say about this. He says: “Advertising gives all sectors of our economy the opportunity to grow by allowing firms to promote their goods or services and is now one of the biggest sectors within the UK’s booming creative industries.”

Of the one in three SMEs that have advertised, over 60 per cent say it has been a success for their business as value for money. But only 30 per cent of small and medium sized enterprises (SMEs) advertise their services, despite every £1 spent on advertising being estimated to have eight times the impact on growth as £1 spent by larger firms.

SMEs represent just 18 per cent of total advertising spending in the UK but account for 40 per cent of UK revenues and 50 per cent of jobs, according to a report by The Advertising Association is using the report to encourage SMEs to advertise after finding that small and medium sized companies are under spending relative to their turnover:

The AA argues that an increase in advertising by SMEs would boost jobs and growth as well creating demand for products. Its CEO says:  “Advertising pays, no matter the size of the business. There are sharp lessons here for entrepreneurs, policymakers and crucially for advertising itself.”