Yesterday, I wrote about how Iceland has coped, even prospered, after the crash of their banking system (here). 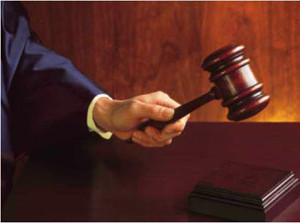 I blogged that when the financial crisis hit America, instead of a wholesale dismissal of those who most directly caused it, the banks simply allowed their trouble-making workers to play a game of musical chairs. When the music stopped, the same people who had led to the mess were still sitting. But in Iceland, blame for the crisis fell almost entirely on the country’s financiers and almost all the top executives were fired and many are now facing criminal prosecution. In Iceland, they treat financial crimes like crimes.  After it was shown that the biggest bank in Iceland was lending people money to “invest” in the bank (therefore boosting consumer confidence in the bank, also known as fraud), Iceland threw the book at the executives who committed the crime:

Yesterday, we learned that the trial of senior executives at the bank that almost bankrupted Ireland has begun with tight security around the Dublin courthouse where the men being blamed for the Irish banking crisis are to be tried. The Guardian reports that “it will be one of the most complex and controversial trials in the history of European financial crime, with hundreds of witnesses, millions of documents and a trio regarded as national hate figures in Ireland”.

Three leading figures in the now defunct and disgraced Anglo Irish Bank – Sean FitzPatrick, Pat Whelan and William McAteer – will each face 16 charges of unlawfully providing financial assistance to individuals for the purpose of buying shares in Anglo Irish Bank in 2008.  All of the charges relate to a specific person who allegedly received financial assistance between 10 July and 17 July 2008. The trio of former top bankers deny all the charges against them.

Among the star witnesses expected to give evidence will be Ireland’s one-time richest man, Sean Quinn, who borrowed billions from the bank to fund a global property portfolio during the Celtic Tiger boom years. When property prices collapsed across the world, Quinn owed billions and had to file for bankruptcy.

Around €30bn of taxpayers’ money had to be pumped into the bank in 2008 to rescue it and the entire Irish banking system from total collapse. The bank has since been nationalised and renamed as the Irish Banking Resolution Corporation.

Against the above background I was interested to see the FCA has publishes Libor warnings to two bankers. The notices refer to the rigging of the Libor interbank lending rate and although handed out in November are the first made public by the regulator since the FCA gained the authority in October. In addition, the FCA is pursuing alleged Libor offenders through civil action. The case will now go to the FCA’s regulatory decisions committee (RDC). This is an independent body that will hear evidence from the two bankers and decide if the FCA is right to charge the bankers with a penalty. The move marks a change in the FCA’s publicity for such cases. Previously it could not reveal a decision notice had been issued until the RDC decided the case.

SEC on accounting and financial fraud

The report comes from Morrison & Foerster, a large law firm with over 1,000 lawyers in 17 offices. They studied SEC enforcement patterns in 2013 and noted changes designed to highlight the SEC’s “robust” enforcement program that is “aggressive and creative,” and that “continue[s] to focus on financial statement and accounting fraud.”

In the aftermath of the financial crisis, the SEC focused more on cases related to the mortgage meltdown, accompanied by an intense wave of insider trading cases. But the balance began to tip towards accounting and financial reporting enforcement 2013, with a task force to focus on accounting fraud and leveraging analytical software to ferret out unusual financial reporting behaviour (see accountingTODAY stories: SEC Refocuses on Accounting Fraud and SEC Creates Task Force to Combat Accounting Fraud).

Revenue recognition remains a top item for the SEC (see my Blog today on news for accountants and finance directors about Alchemy and HP), according to SEC officials, but other performance benchmarks used by companies will probably also be carefully examined.

The Treasury Select Committee, under the chairmanship of the impressive Andrew Tyrie, has called on the FCA to act over banks’ sales incentives. He wants the FCA to crack down on banks’ sales-based incentive practices and has written to Martin Wheatley, chief executive of the FCA, pushing the regulator for a ‘deep cultural change’ on how the banks pay branch staff.

Tyrie’s letter was prompted by the £28 million fine handed out to Lloyds Banking Group in December 2013 for failings in its sales practices.  Tyrie said that the FCA had to date shown ‘little’ enthusiasm for taking action for such change.

The news story was in City A.M. here.

Corruption across the EU is ‘breathtaking’, the European Commission says

Yesterday, BBC News reported on news (here) from the EC about a report on corruption.  The extent of corruption in Europe is “breathtaking” and it costs the EU economy at least 120bn euros (£99bn) annually, the European Commission says.  EU Home Affairs Commissioner Cecilia Malmstroem has presented a full report on the problem.  She said the true cost of corruption was “probably much higher” than €120bn.  Three-quarters of Europeans surveyed for the Commission study said that corruption was widespread, and more than half said the level had increased.  The cost to the EU economy is equivalent to the bloc’s annual budget.  For the report the Commission studied corruption in all 28 EU member states. The Commission says it is the first time it has done such a survey. 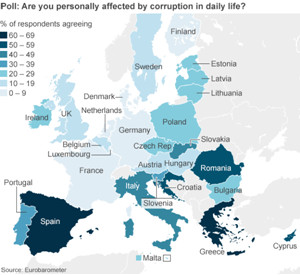 In the UK only five people out of 1,115 – less than 1% – said they had been expected to pay a bribe. It was “the best result in all Europe”, the report said. But 64% of British respondents said they believed corruption to be widespread in the UK, while the EU average was 74% on that question.

In some countries there was a relatively high number reporting personal experience of bribery. In Croatia, the Czech Republic, Lithuania, Bulgaria, Romania and Greece, between 6% and 29% of respondents said they had been asked for a bribe, or had been expected to pay one, in the past 12 months. There were also high levels of bribery in Poland (15%), Slovakia (14%) and Hungary (13%), where the most prevalent instances were in healthcare.

The EC published a press release yesterday and explained why it has adopted the first EU Anti-Corruption Report. The Report gives a frank assessment of how each Member State tackles corruption, how existing laws and policies work in practice, and it suggests how each Member State can step up the work against corruption. The Report calls for improvements in a number of different areas. In some Member States, vulnerability to corruption in public procurement processes is the main problem. In others, political party financing is not transparent enough. Widespread corruption at the level of local authorities is another example, or that many healthcare patients have to pay under the table to receive proper medical care.

The Europa press release is here.