How to play Backgammon 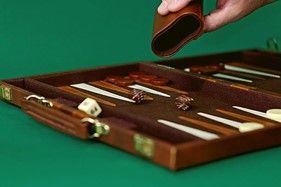 Backgammon is one of the oldest known board games with a history that can be traced back nearly 5,000 years to archaeological discoveries in Mesopotamia. It is a two-player game where each player has fifteen pieces (checkers or men) that move between twenty-four triangles (points) according to the roll of two dice. The triangles are grouped into four quadrants each of six triangles.

The objective of the game is to be first to bear off, i.e. move all fifteen checkers off the board.

The game involves a combination of both strategy and luck (from rolling dice). While the dice may determine the outcome of a single game, the better player will accumulate the better record over series of many games. With each roll of the dice, players must choose from numerous options for moving their checkers and anticipate possible countermoves by the opponent. The optional use of a doubling cube allows players to raise the stakes during the game.

The game is played on a folding wooden board with checkers and dice. The object of the game for the players is to remove all their checkers from the board.

The Board
If you click here: www.shorturl.at/hosDV you can see the Board laid out at the start of a game and what happens as it progresses when the players move following the roll of their dice.

Setting Up
Checkers are arranged with two on point 24, five on point 13, three on point 8 and five on point 6.  To start the game both players roll a single dice, the player with the highest roll begins.

Checkers are always moved towards your home board onto a point of a lower number and can only be moved onto an open point. An open point is occupied by no more than one of the opponent’s checkers. To move one checker using the total of the dice roll, the intermediate points must be open points.

Hitting and Entering
A blot is a point occupied by a single checker. If a blot is hit during the opponent’s play, the checker must be placed on the ridge along the centre of the board, known as a (or the) bar. If you have any checkers on the bar, these must be entered into the opponent’s home board during your next turn. Checkers are entered onto an open point corresponding to numbers rolled. For example, if a 6 and 4 are rolled, the checker must be placed on point 6 or 4 of the opponent’s home board.

Bearing Off
When a player has all their checkers in their home board, they can start removing them from the board: this is known as bearing off. This is done by rolling both dice and removing a checker from each corresponding point. For example, if a 6 and 4 is rolled, a checker can be removed from point 6 and 4. If there are no checkers on point 4, one must be removed from a higher-numbered point. If there are no checkers on a higher-numbered point, you must remove a checker from the highest numbered point available.

Checkers can still be hit while bearing off and must be placed onto the bar and entered back into play as detailed above. When a first player bears off all of their fifteen checkers, the game is won!

Other Rules
There are other rules not covered here such as Doubling, Redoubling, and Gammons. Backgammon chouette (click here) is a variant of backgammon designed for three or more players. Before you try to play a game of backgammon chouette, you may want to take some time to learn how to play regular backgammon first and the foregoing will hopefully get you started if you haven’t played the game before. Go on, it’s fun… 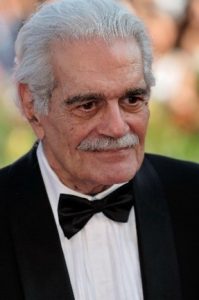 Over the years, many well-known celebrities have been aficionados of Backgammon. They include Tina Turner, Cole Porter, Humphrey Bogart, John Huston, Paul Newman, Nelson Eddy and Jeanette Macdonald, and, perhaps the best known of all – Omar Sharif, whose name has been used to promote tournaments, books, and other backgammon products (there’s even an electronic version named after him).