How effective was medieval medicine? 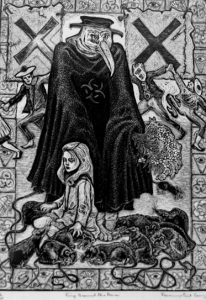 Picture Credit: “Ring around the rosie” by Thad Zajdowicz is marked with CC0 1.0

How effective was medieval medicine to combat the diseases of the time? Dr Elma Brenner (the Wellcome Collection’s medieval specialist) wrote about this on History Extra, the official website for BBC History Magazine (here). She asks whether medieval scholars could grasp the causes of these epidemics and explores the medical treatments available to counter them.

There were many sicknesses around that needed attention and eradication. Some are covered in Dr Brenner’s article:

The Black Death: The worst plague outbreak of them all (in Europe 1347–51) was blamed on an inauspicious planetary alignment. It was terrifying and killed up to 60% of the population. Doctors were powerless to treat it. This illness appeared in two main forms: pneumonic plague, which affected the lungs and made the sufferer cough up blood, and bubonic plague, which caused swellings (buboes) on the body, especially in the groin and armpits. Modern-day scientists have identified the cause as the bacterium Yersinia pestis, carried by wild rodents. The bubonic form was transmitted to humans via fleas, but the pneumonic form, the most lethal strain, was transferred from person to person through the air.

The French physician and surgeon Guy de Chauliac witnessed the epidemic in Avignon in 1348, where it had spread rapidly from Italy. After falling into a gravely dangerous fever, De Chauliac was one of the few to recover from bubonic plague. He identified the primary cause as a conjunction of planets in the sign of Aquarius in 1345, thus corrupting the air.

The Pox: Although the pox only affected Europeans in the 1490s, it immediately caused great anxiety and fear. This sexually transmitted disease, roughly equivalent to modern-day syphilis, caused pain and unsightly swellings and could attack the nose and the face. Contemporaries linked it to prostitutes and immoral behaviour.

Leprosy: After the plague, leprosy is the disease most synonymous with the Middle Ages. It was undoubtedly a major issue for contemporaries, judging by its prominence in medieval literature, art, documents and saints’ lives. Comparatively few people developed leprosy since it isn’t heavily contagious, but those who did get it suffered skin sores, facial disfigurement and even blindness in some cases.

Dysentery: In late medieval England, outbreaks of an epidemic illness known as ‘the bloody flux’ or ‘dysentery’ were reported. This intestinal infection, causing blood-filled diarrhoea, manifested mainly in crowded, dirty conditions. Though thoroughly unpleasant and deadly, it was much less frequent than plague epidemics.

Bubonic plague: The most intensely feared killer in medieval Europe was pestilential illness. The Black Death of 1347–51 was unprecedented and decimated more than half of the population in some areas. Following another epidemic in the 1360s, there were recurrent plague outbreaks in England, France, Italy and elsewhere well into the 17th century.

The Sweating Sickness: This disease was almost exclusively confined to England. I wrote about the sweating sickness in the June 2021 edition of Nil Desperandum (page 14).

Seeing a Doctor
Most people in Medieval times never saw a doctor. They were treated by the local ‘wise-woman’ who was skilled in using herbs, or by the priest, or the barber, who pulled out teeth, set broken bones and performed other operations. The cures’ available were a mixture of superstition (magic stones and charms were very popular), religion (for example, driving out evil spirits from people who were mentally ill) and herbal remedies (some of which are still used today). Monks and nuns also ran hospitals in their monasteries, which took in the sick and dying.

With many wars going on at the time, doctors and barber-surgeons had plenty of practice in treating wounds and broken bones. They were able to set broken bones in plaster and seal wounds to stop them from getting infected. They knew how to use alcohol or plants like mandragora to send people to sleep or dull the pain of operations if that’s what you might call it. They could even remove diseased parts of the body, for example, the gallbladder, and deliver babies by Caesarean section.

In the middle ages, dentists were called dentatores, who had also learnt a great deal from Arab specialists. They had files, forceps, and many other tools and could remove decay, fill holes, strengthen loose teeth with metal wires, or even fit false teeth made of ox-bone. Holes were thought to be caused by tiny worms in the teeth. But only the rich could afford the services of the dentatores. Anyone else with a loose or aching tooth went to have it pulled out at a booth in the fair or market or by the barber.

Since many illnesses were potentially deadly, the best approach was prevention: staying healthy through a balanced lifestyle. When sickness did occur, attention to food and drink, exercise and other kinds of activity, as well as one’s emotions, could bring about recovery.

Whilst today there are antibiotics to treat infections, no such treatments existed in the Middle Ages. People were aware that wounds, childbirth and surgery were all dangerous moments because of the risks of infection. Medieval people knew what infections were but were unable to do much to treat people struck down by them.  In medieval times, knowledge about the causes of disease was limited, so there was little chance of preventing it.

There were very few doctors about – most were educated men from the higher ranks of society who learned through practice rather than by attending a medical school. But they had strange ideas: for example, some doctors told patients not to bathe, as this would open the pores and allow the disease in. Other doctors thought it was domestic animals that spread the plague and other diseases. 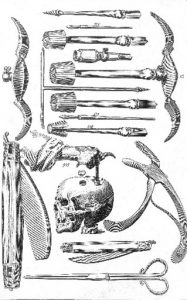 In the 1350s, it was not a good time to be ill. Medieval doctors did not have a clue what caused disease. The average life expectancy was perhaps 30-35, that’s if you were lucky enough to survive early childhood – infant mortality was extremely high where 20% of children died before their first birthday, and many women died in childbirth. Nearly a thousand years after the fall of Rome, medicine in Europe had regressed and returned to a more primitive outlook, with the only treatment on offer continued to be a mixture of herbal remedies, bleeding and purging, and supernatural ideas. But, recently, historians have suggested that despite the primitive approach, many medieval treatments were successful, especially the herbal remedies.

Nevertheless, there were other types of cures used in the Middle Ages that many people would certainly not consider today, especially one called trepanning (also called trepanation, or trephination), the oldest surgical procedure known to humanity. Patients needed it ‘like a hole in the head’ if you’ll forgive the pun – having a hole cut in their skull to let fevers out of the body. Most died from this treatment.