How a ‘goof’ became a maths genius thanks to a blow to the head. Could your firm do with a mugging?

Now, I’m not suggesting you might be a goof. Far be it for me to make such a suggestion.

This a story about Jason Padgett, a college drop-out who sported a dodgy hair cut – quite goofy really. The Telegraph reported recently on what happened to poor Jason who was the victim of a late-night mugging during which not only was he knocked unconscious but the blow that knocked him out actually changed his life. Punched and kicked in the head, he suffered a brain injury. Only, unlike most of the millions of people suffering with Traumatic Brain Injury (TBI), he acquired new gifts with the blows. He now has savant syndrome and synesthesia, though the first doctors who treated him simply called it a profound concussion.

For Jason, the effect of his injury was remarkable, very rare – and strangely fortunate. 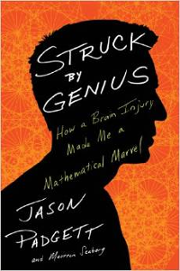 When he woke up the next day after the mugging he discovered he had an extraordinary ability in mathematics and geometry. The Telegraph reported that Jason’s vision had changed: it was somehow sharper and more comprehensive than before. Jason recalls turning on the bathroom tap and noticing “lines emanating out perpendicularly from the flow”. He added: “At first, I was startled, and worried for myself, but it was so beautiful that I just stood in my slippers and stared,” he told the New York Post. When the visuals continued over the next few days, he became “obsessed with every shape in my house, from rectangles of the windows to the curvature of a spoon”.

In the following years, Jason stopped going to work and spent all of his time studying maths and physics. Then, seeing a BBC documentary about Daniel Tammet, a young Londoner with savant syndrome – the condition in which a person with a mental disability (in Daniel’s case, autism, a condition shared by 50 per cent of savants) shows prodigious abilities in memory and art, maths and music, far in excess of what is considered normal.

Jason has written a new book about his experiences: Struck by Genius: How a Brain Injury Made Me a Mathematical Marvel.

Probably the most famous savant of all was Raymond, Dustin Hoffman’s character in the 1988 film Rain Man. The Raymond character was based on a real-life savant called Kim Peek who, despite having an IQ measuring just 72 (below normal), had a stunning memory and ability to read and recall information.

Could a blow to the side of the head transform your firm?

1) the business is performing so badly that the bank manager gets fed up with supporting the firm and threatens to withdraw the overdraft facilities unless the firm changes, or

2) a disaster occurs, such as a huge negligence claim, which brings the firm to its knees.

Maybe all your firm needs to be become successful with everybody in it being regarded as a genius is simply to take the time out to think about what you’re doing and why you’re doing it. In other words, as Michael Gerber said in The E-Myth, work on your firm and don’t spend all your time working in it.