John Hyde has reported in Law Society Gazette that US online legal service Rocket Lawyer is preparing to dispense legal advice via client interactions which are not much longer than Twitter posts. 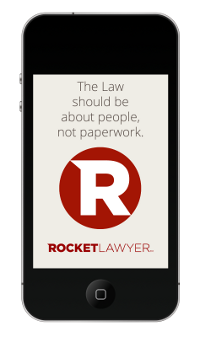 The company is to offer a free question-and-answer service on a smartphone app to be launched in the New Year. Consumers will have 600 characters to explain their legal problem and are promised a free reply from a qualified solicitor within 24 hours.

The app was created in the US earlier this year and Rocket Lawyer’s UK subsidiary is now preparing to roll it out in the UK in the first quarter of 2014.

Rocket Lawyer founder Charley Moore told the Law Society Gazette that the on-call service will answer any legal question and guarantees a private answer. Any work that comes in as a result is then farmed out to a member of Rocket Lawyer’s panel picked according to geography or practice area.

‘This is the “on ramp” for legal services for the next generation,’ Moore said. ’They expect and demand that lawyers are going to be responsive to them, which means being available through mobile.’

Rocket Lawyer’s website already allows members to create legal documents from online templates and to have one free 30-minute consultation a month with a lawyer from a panel of firms, plus a discount on further consultations.

‘We know the majority of our users have never consulted with a lawyer before and are not keen on talking over the phone,’ Moore said.

The company says that its clients have created more than 200,000 files online in the first full year of operating in the UK. He expects ‘millions’ of documents to be downloaded in 2014 as the company increases its marketing online and on radio.

Rocket Lawyer currently has 20 law firms on its panel from across England and Wales, but plans to increase that number if and when there is demand, as well as to expand into Northern Ireland and Scotland.

Moore denied that his company was intent on taking work away from existing law firms, describing Rocket Lawyer as ‘the best opportunity lawyers can have right now’. He added: ‘Where [other start-ups] have run into trouble is they have been competitive to lawyers. There is a latent demand for legal services with millions of transactions and disputes yet to be resolved. We’re making it possible for lawyers to be much more efficient and satisfy the demand that the traditional approach can’t handle. There is a crushing burden on the legal system under the weight of demand.’

This could be the start of a transformation in the way that some professional services are delivered. Accountant and Lawyers should take note. My advice is that firms should brainstorm ideas around this subject at the next Partner’s meeting to see how such changes could affect them. What do you think? Let us know.