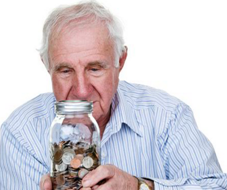 News that inflation has hit its 2% target rate for the first time in four years might appear to be a positive for those in retirement, but questions remain over how long the government can afford to protect pensioners from the rising cost of living. The question was posed in an article yesterday, here.

The consumer prices index (CPI), the official measure of inflation since 2010, rose 2% in the year to December 2013, down from 2.1% in November. However, pensioners will benefit from a 2.5% rise in their basic state pension in 2014 because of the government’s triple-lock inflation protection guarantee.

Is this good or bad news for pensioners?

The guarantee means the state pension rises by either price inflation, earnings or 2.5%, whichever is the higher. The CPI hit 2.7% for the year to September 2013, when the pension inflation rate was determined. So, is December’s 2% figure good or bad news for pensioners?

If inflation were a lot higher, pensioners would receive more than 2.5% due to the triple lock. However, some believe the cost of living is higher for pensioners than the rest of the population. In fact, some estimates put ‘pensioner inflation’ 4% higher than the national figure over the long term, because the basket of goods they buy is more expensive. Maybe they like going to Sainsbury’s or Waitrose rather than Tesco or Lidl.

So, despite the triple lock, pensioners may still be anxious to see inflation come down, so long as it is due to factors they consider relevant, such as their energy bills.

Interestingly, the previous national inflation measure called the retail prices index, rose from 2.6% to 2.7% in the year to December.

The Prime Minister said that the triple lock was launched to offset the fact that pensions would rise less under the CPI. The Conservatives are pledging to keep it until 2020, but as the article says, it is expensive, costing an estimated £45 billion over the next 15 years.

Tom McPhail, head of pension policy at Hargreaves Lansdown, called for a more realistic inflation link: ‘The triple lock hardwires into the system that pensioners will be more affluent than the rest of the population. But if pensioner inflation runs higher [than the CPI], the answer is not triple lock but an inflation-proofing measure that takes into account the real cost of living for pensioners using, for example, a pensioner prices index.’

But all the concern that exists at present isn’t only about the rate of increase in the state pension. It’s also about when the pension starts to kick in and the erosion in rates for privately-funded pensions. . Earlier this month, the Telegraph reported, here, that campaigners have warned that pensioners have seen their private savings hit by record low interest rates and the Bank of England’s policy of printing money, known as “quantitative easing”.

Charities working with the elderly have also criticised plans to raise the state pension age to 67 by 2028, which they say will hit workers who lose their jobs in their 50s and 60s, while the Chancellor announced in his Autumn Statement last month that the state pension age would rise further to 68 in the mid-2030s and 69 by the late 2040s.

Leaving pension inflation on one side, pension in Britain aren’t particularly good to start with. Britons on average wages can expect a pension worth just 33 per cent of their final salary when they retire, according to the Organisation for Economic Co-operation and Development, reported on here. Of the 34 countries in the OECD, only Mexico had a worse rate at 29 per cent compared to a 54 per cent average across the rest of the bloc. 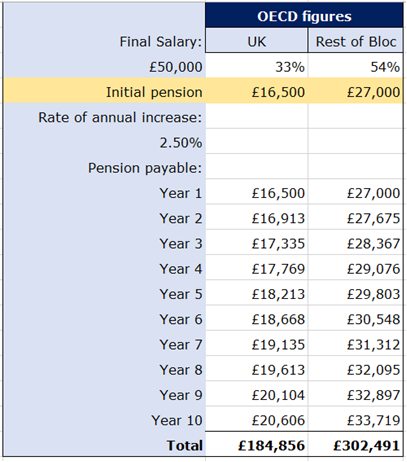 It’s all well and good for the Government to introduce a guarantee that the pension will rise but if it starts so low to begin with, the rate of increase become quite immaterial. Just look at these figures which assume that someone earns £50,000 a year at retirement and enjoys 10 years before moving to a higher existence:

OK, I know (or rather I think it’s the case) that the figures given in the OECD report probably relate to private pensions (or both Private and State pensions) rather than State pensions alone, but the chances are that the principle is still valid. The Express article was, however, titled: “Britain’s state pension one of the worst in the world”.

So my conclusion is that it is disingenuous for politicians to talk about the rate of increase in pensions without taking account the base amount of the pension itself.

I would be interested to hear from my readers about any other ideas floating about on pensions. It seems to be a hot topic at present and it’s one that could influence the result in next year’s General Election.