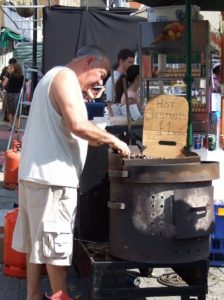 Not many people know this, but I am a Cockney.  Phew… I feel better already sharing that with you. The term Cockney is applied as a demonym (that’s a posh word, ‘invented’ around 1995-2000, for people who live in a particular location) and for Cockneys, it applies to people from defined areas of London – namely East Enders or to those born within the sound of Bow Bells.

The Cockney dialect is the form of speech used in those areas, and elsewhere, particularly among working-class Londoners.

Technically, you can only be a Cockney if you were born in the East End of the city. To be really specific, you must have been born within the sound of Bow Bells – that’s the bells of St Mary-le-Bow Church in Cheapside.

Etymologically, where does the word Cockney come from?  Good question: in 1362 the word was used to mean “a small, misshapen egg“, from Middle English coken + ey (“a cock’s egg”).

The mythical, imaginary Land of Cockaigne (a land of contraries, where all the restrictions of society are defied: abbots are beaten by their monks, sexual liberty is open and food is so plentiful that the skies rain with cheese) may have been the source of the word under a variety of spellings, including Cockayne, Cocknay, and Cockney. The word “Cockaigne” comes from the Middle French phrase pais de cocaigne, which literally means “the land of plenty.”

Worryingly, the present meaning of Cockney comes from its use among rural Englishmen in around 1520 as a pejorative term for effeminate town-dwellers, from an earlier general sense (encountered in “The Reeve’s Tale” of Geoffrey Chaucer’s The Canterbury Tales in 1386). By 1600, the word Cockney was being particularly associated with the Bow Bells area.

The connection with the bells of St Mary-le-Bow Church in Cheapside is the one I like best. Apart from the first few months of my life, after birth in Whitechapel Hospital, which was spent in London town, Sussex has been my home, perhaps because I had no wish to be called an ‘effeminate town dweller’.

My tip of the day, if you plan to visit the East End of London, is – don’t call the market traders in Petticoat Lane effeminate town dwellers. Ignore this tip at your peril.

Learn more…
Listen: Have a butcher’s hook at this video with your china plates. Not sure what this means? Learn how to speak Cockney rhyming slang with Anglophenia’s Kate Arnell, just click here to find out more.

Or try this: ‘A LONDONER Explains How to Speak COCKNEY’. Click here to become an expert, in next to no time.

Or you try to ‘Learn the Cockney accent with a Jason Statham’ look-alike), here.