Clinton to webcast on “The Global Economy: Challenge of the Century”

by Martin Pollins | May 12, 2014 | Miscellaneous, Tax, Business and Management Issues, The Economy

This looks like an interesting upcoming webcast and so I bring it to your attention. Don’t miss it. Listen for the answer to my question about how a return to integrity and honesty of people in power and high places can be brought about.

Brookings will host US ex-President Bill Clinton for the inaugural Robert S. Brookings President’s Lecture. Clinton will speak on “The Global Economy: Challenge of the Century.” Click to register to receive a reminder about the lecture.

President Clinton will be taking questions from viewers around the world, and invite you to submit your own in advance of his address. You can do so on Twitter by using the hashtag #ClintonAtBrookings. If you’re not on Twitter, you can submit a question here. 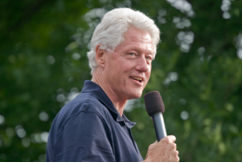 Named in honour of Brookings’s founder, the annual Robert S. Brookings Lecture Series was launched in 2014 to provide a platform for a leading public figure to address major governance issues. While Brookings experts work on the full breadth of policy issues locally, nationally and globally, all of the Institution’s work focuses on governance.

My question for Bill Clinton focussed on integrity and honesty of people in power. It’s interesting that Sky News Today says that “UKIP is on course for a massive political upset in the European elections according to a new poll.” The poll confirms that Nigel Farage’s party has surged to the front by capitalising on a lack of trust in the Westminster parties by the UK electorate.

Let me know what you think about integrity and honesty and whether it is absolutely essential in today’s society. Email me mpollins@bizezia.com or comment below with your thoughts.

UPDATE: See what Clinton said in my blog post here.