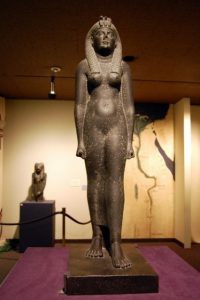 Despite what many people may believe, the last queen of Egypt was not born in Egypt at all. As best as historians can tell, Cleopatra VII (that is her formal name) was Greek.

Cleopatra VII Philopator (that word comes from the Greek and means “father-loving” and was a common royal epithet among Hellenistic monarchs) was the last active ruler of the Ptolemaic Kingdom of Egypt. As a member of the Ptolemaic dynasty, she was a descendant of its founder Ptolemy a Macedonian Greek general and companion of Alexander the Great.

Cleopatra was married, albeit for a short time, to Marcus Antonius (Mark Antony) a Roman politician and general. The story of their affair, their war, their defeat and, finally, their suicides has been told and retold for centuries – Adrian Goldsworthy, author of Antony and Cleopatra uncovers the couple’s true story. There’s an excerpt online, here.