It’s generally easy to change employment terms that are beneficial to employees such as an increase in pay or provision of a car allowance. It’s a totally different thing if you want to change terms that are less acceptable to an employee, for example a pay cut.

First, you need to determine whether the change affects the employment contract, and if so, how to make a legally binding change.

GOV.uk provide some useful guidance on changing an employment contract, and it is available online, here.

You should make sure you:

Does the employment contract need amendment? 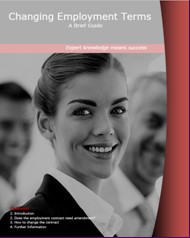 A contract is a legally binding agreement between you and your employee, which is formed when the employee agrees to work for you for pay.

A change of terms will not require a change to the contract of employment where the change is simply a change in practice or where:

If it is determined that the contract does need amending, then this can only be done with the employee’s agreement or within the scope of the existing terms which must be scrutinised.

The “contract” is made up of both oral and written agreements and may include:

How to change the contract

Such an imposed change of terms is a breach of contract and the employee may respond by:

An employer may choose to terminate the existing contract and offer continued employment under the new, varied terms. In this case, the employer must comply with the statutory dismissal and disciplinary procedures for the dismissal not to be automatically unfair.

Again this strategy is not without risk and the employee may respond by:

It should be noted that where the employer terminates the contracts of all employees “of a description or in a category to which the employee belongs” and then re-engages the employees then the statutory dismissal and disciplinary procedures may not apply. However, if the proposed change singles out a particular group of employees (for example older employees), then this could give rise to a claim of indirect discrimination.

In addition, where the collective consultation obligations apply then the statutory dismissal and disciplinary procedures may not apply. Where this approach is used to terminate the contracts of multiple employees the dismissals may be considered as redundancies for certain purposes. If 20 or more employees are affected the employer must notify the Secretary of State and comply with the statutory collective consultation obligations. 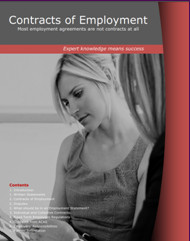 The employer will be required to inform and consult its employees in a number of circumstances, such as:

Some time ago, I wrote the text for a couple of publications in Bizezia’s online business library dealing with Contracts of Employment and Changing Employment Terms. If you would like a copy of either (or both) of these, please email me at: mpollins@bizezia.com.