Oh dear, SMEs may be excited by the news that we are out of the recession and even on the cusp of another boom era, but they will not be overjoyed to know that the Bank of England report this week says net lending to businesses fell by £3.7bn in November. And this is despite attempts to rebalance loans away from mortgages. Hopes of a balanced economic recovery have been dealt a blow with figures showing a worsening slump in business lending, even as mortgage levels reach their highest level since the financial crisis. The Telegraph story is here.

The continued decline is likely to worry the Bank of England’s Mark Carney, who has attempted to engineer an increase in business lending. 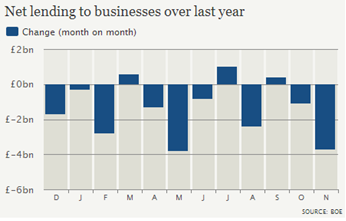 In November, Mr Carney raised concerns about overheating house prices and attempted to rebalance the BoE’s Funding for Lending Scheme (FLS), which allows banks to borrow at rock-bottom rates if they lend out the money. The BoE was hoping the slump in business lending would abate after five years in the doldrums. He cancelled a key support package for consumer lending and focused it on businesses. But some economists have raised fears that the strengthening UK economy is down to unsustainable rises in consumer spending and house prices.

The BoE’s Trends in Lending survey, as well as separate data from the Council of Mortgage Lenders (CML), showed mortgage activity reaching its highest levels since 2008.

The previous lending report – released in October – indicated that the fall in net business lending – the difference between new loans and repayments – had started to tail off.

This comes despite increasing demand for business loans, according to the BoE’s latest credit conditions research. “The annual rate of growth in the stock of secured lending to individuals in the year to November remained weak,” the Bank said.

Despite the economic recovery of last year failing to have an uplifting effect on business loans, economists believe the prospects are better for 2014. The Telegraph article reports that Howard Archer, chief UK and European economist at IHS Global Insight, said: “With the UK sustaining a decent level of economic activity and prospects looking relatively bright, it seems highly likely that business demand for credit will pick up appreciably over the coming months.”