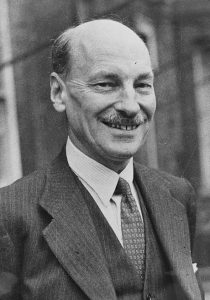 In 1940, Clement Attlee (see picture above), the Labour leader in Churchill’s wartime cabinet, urged everyone to stay calm and continue in his or her job until ordered to do otherwise. Attlee took Labour into the wartime coalition government in 1940 and he served under Winston Churchill, initially as Lord Privy Seal and then as Deputy Prime Minister from 1942. After the end of the war, the coalition was dissolved and Attlee led Labour to a landslide victory at the 1945 general election,

This was at a time when the government had won the right to direct any adult aged between 14 and 65 into some kind of employment. By 1942, Labour Minister, Ernest Bevin had mobilised 22 million workers and troops, causing the News Chronicle to reflect Today: ‘no country in the world has ever mobilised its manpower to this extent’, and went on, ‘that only about 350,000 men and women were directed into jobs they hadn’t chosen’. Perhaps this was government propaganda!

In May 1940, Parliament had rushed through, in three hours, the Emergency Powers Act, which gave the government unlimited authority over every person and all property in the land. Banks, munitions, industry, wages and profits where there were powers to impose 100% tax.

All strikes were banned under Order 1305, of July 1940, but there were some stoppages later in the war, in aircraft production, coal and shipbuilding. Many over seemingly trivial matters such as canteen facilities, but important when one considers the long hours and general pressures people were working under.

One concern was the abolition of differentials between skilled and unskilled being watered-down with new recruits of both sexes receiving the same, admittedly, good money.

The Imperial War Museum website summarises the position, here:
From early 1941, it became compulsory for women aged between 18 and 60 to register for war work. Conscription of women began in December. Unmarried ‘mobile’ women between the ages of 20 and 30 were called up and given a choice between joining the services or working in industry.  Pregnant women, those who had a child under the age of 14 or women with heavy domestic responsibilities could not be made to do war work, but they could volunteer. ‘Immobile’ women, who had a husband at home or were married to a serviceman, were directed into local war work. As well as men and women carrying out paid war work in Britain’s factories, there were also thousands of part-time volunteer workers contributing to the war effort on top of their everyday domestic responsibilities. Other vital war work was carried out on the land and on Britain’s transport network.

Those in vital industries were kept there by Bevin’s, 1941 Essential Work Orders (EWO), which affected eight million workers. It also stopped sacking in key industries, shipbuilding, engineering, aircraft work, railways and the building trade, where conditions were eased by better rates of pay. Women played a vital part in all areas of war work as the Daily Telegraph reported in May, of a New Register of Women for War Work.

Some 400,000 women of the 1920 Class registered under the Registration for Employment Order and would be entered on a National Work Register, and to consider what they wanted to do including uniformed services.

However, women would not be taken away from useful employment, such as looking after evacuees, and those running homes and looking after children weren’t expected to move. The EWO could be blamed for a decline in production especially in coal, which fell every year of the War, though loss of young manpower and long shifts must have contributed.

The shortage of manpower was improved later by a ballot of men which allocated many to work in mining: the Bevin Boys. 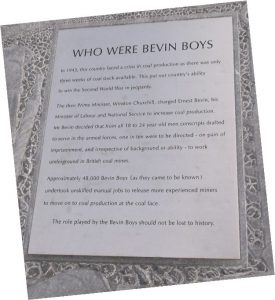