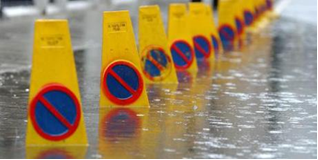 I don’t usually write about environmental issues. But I noted that with the prolonged flooding in Somerset now running into weeks, it was left to the future King of England, Prince Charles, to put himself out and visit the area earlier this week.

He and the Duke of Westminster have offered financial support to flood-hit residents on the Somerset Levels by pledging a combined total donation of £100,000. It’s a start, but it won’t go very far.

£100m on its own won’t go very far. The problems in Somerset are so bad that homes are being evacuated – David Cameron has announced that the area will get Government assistance of £10 million for urgent work. In total, the Coalition has pledged £100 million to fund essential flood repairs and maintenance over the coming year, with the other £75 million for repairs and £15 million for extra maintenance. I query what the word “over the coming year” woven into the pledge means but it’s clear that this money isn’t even all available straightway. The Prime Minister has denied that the Coalition response to the Somerset flooding has been inadequate but says (presumably meaning, he accepts the blame for) there has been too little dredging of rivers.

Insurance – a problem or all sorted?

The next worry for homeowners in the flood-affected areas of Britain is on-going insurance against future water damage to their properties. There are many questions: Will it affect property values? Will lenders hold back on lending?  …and so on.

Flood Re, is an agreement in principle between the UK government and the insurance industry to deal with flood insurance. Read about it here. The aim is to ensure homeowners and residents living in high flood risk areas of Britain can continue to find affordable flood insurance by placing a limit on the total cost. Households across Britain will pay into a collective fund through their home insurance premiums, which will be used to offset the costs of flood damage and fund the flood insurance cap. It won’t start until mid-2015: until then, flood insurers will continue to follow the Statement of Principles – a pact between the DEFRA and the insurance industry, which guarantees cover to businesses and households at risk of flooding. Read about it here.

In the USA, they have something called The National Flood Insurance Program (NFIP) – this enables property owners in participating communities to purchase insurance protection from the government against losses from flooding. It is designed to provide an insurance alternative to disaster assistance to meet the escalating costs of repairing damage to buildings and their contents caused by floods. There is a dispute going on at present as the Obama administration wants to spread any increases over time but the insurance sector want increased premiums now. Only last week, the US Senate passed a bill to delay sharp increases in flood insurance rates for millions of property owners in coastal and flood-prone areas. 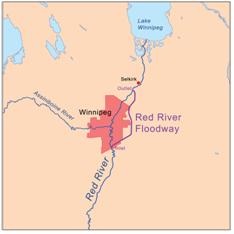 We have a Canadian at the helm at the Bank of England so I followed a trail to see what the Canadians did about the floods, which hit Winnipeg in 1950.

I know this part of Canada quite well, having visited the City on numerous occasions. In 1950, it was inundated with water. Nearly 100,000 people were evacuated, 10,000 homes were flooded and it’s estimated the $125 million price tag that year would be closer to $1 billion today.

When engineers built a giant moat around the city of Winnipeg in Manitoba, Canada, more than half a century ago, they were creating a marvel of flood control engineering. There’s a film online, about it, here. Some 100 million cubic yards of earth was moved – more than from the Panama Canal.

Do you see what I mean when I say that £100m won’t go very far in the UK and why £10m for Somerset is (forgive the pun) only a drop in the ocean?

The Red River Floodway is an artificial flood control waterway in Western Canada, first used in 1969. It is a 47 km (29 mi) long channel which, during flood periods, takes part of the Red River‘s flow around the city of Winnipeg, Manitoba to the east and discharges it back into the Red River below the dam at Lockport. It can carry floodwater at a rate of up to 2,550 cubic metres (91,700 cubic feet) per second.

It was pejoratively called “Duff’s Ditch” by opponents of its construction, so named after the then Premier Duff Roblin whose Progressive Conservative government initiated the project.

The Floodway protection system includes more than just the channel to the east of the city, but also the dykes along the river through Winnipeg and the “Brunkild Z-dyke” extending to the west from the south of the city. The Brunkild Dyke was built in 1997 during the “Flood of the Century,” when the volume of water exceeded the safe capacity of the Floodway and water lapped within inches of the city’s dikes.

What a Pickle – But will it be Dave’s Ditch or Pickles’ Moat?

The Telegraph said Lord Smith’s leadership of the Environment Agency is in crisis following the flooding that is gripping parts of Britain. The article on 1 February, here, says that sources have accused Lord Smith, a Cabinet minister in Tony Blair’s Labour government, of “keeping his head down” despite parts of the country being submerged for weeks. Eric Pickles, the Secretary of State for Communities and Local Government is now on the case and is in charge of the Government’s response to the floods. The move came as the Prime Minister pledged the extra £100m mentioned above.

I’m hoping that David Cameron will persuade a responsible person to catch a train (if they are still running) and get down to Somerset very soon with some detailed plans to build either Dave’s Ditch or Pickles’ Moat.

What’s your preferred name for the flood solution?