[15 January 2014, BBC News] Nearly 11 million tax returns are expected to be submitted by the deadline but some 110,000 higher-earning parents who receive child benefit payments face a fine if they fail to register for, and return, tax self-assessment forms. 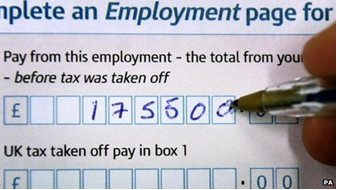 The deadline for submitting online tax returns is 31 January, with 10.9 million expected to be filed to HM Revenue and Customs (HMRC) by then.

Many people, who face a tax charge because they receive child benefit, will be filing for the first time. Tens of thousands of them have yet to register with the deadline looming. They face an immediate penalty of £100 if they miss the deadline.

This penalty could grow by hundreds of pounds if they fail to submit the returns during the following months.

Those eligible for child benefit receive £20.30 per week for the first child and £13.40 a week for any subsequent children.

Child benefit amounts depend on the number of children in the family.  However, a change in the rules by the government has affected families where one parent has a taxable income of more than £50,000.

In order to do so, they must first register and then complete a self-assessment tax return by the end of January. An estimated 90% of the 1.1 million parents affected have already registered, or opted out of receiving child benefit entirely. That leaves about 110,000 people who have yet to register. The process can take more than a week to complete, as they will need an activation code to be sent in the post, so HMRC has urged them to act now.

“The registration process is easy. We know that many parents are newcomers to self-assessment, so it is really important they register and file online to avoid getting a penalty,” said Lin Homer, HMRC chief executive.

Chas Roy-Chowdhury, head of taxation at accountancy body, the ACCA, urged people to file as soon as possible. But he added that the workload of dealing with these first-time filers had been “dumped” on HMRC which was already stretched for resources.

HMRC has an online calculator to allow people to check how much child benefit they need to include in their return.

Annual tax returns are already a way of life for the self-employed and workers with more than one source of income, in order to ensure they pay the correct amount of income tax. They must file the self-assessment form for the tax year ending in April 2013.

Some 10.9 million returns are anticipated by the end of January deadline, up from 10.5 million last year and about 6.5 million have filed already.

Paper returns must have been completed and returned by 31 October, with the final 31 January deadline for online returns. Anyone who misses these deadlines faces an immediate £100 fine, even if there is no tax to pay.

HMRC will want to avoid mistakes of a year ago when 12,000 people, who were told they no longer needed to fill in self-assessment tax forms, were sent penalty notices in error.