What does Apostille mean? 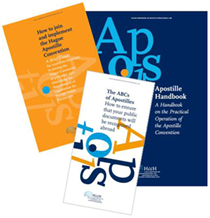 I came across the word Apostille today and have to confess I wasn’t quite sure what it meant. A few Google clicks later and I found that the word simply means “Certification”.

The convention specifies the modalities through which a document issued in one of the signatory countries can be certified for legal purposes in all the other signatory states. Such a certification is called an Apostille (French: certification). It is an international certification comparable to a notarisation in domestic law, and normally supplements a local notarisation of the document.

How to get a UK document legalised

You can get a UK public document ‘legalised’ by asking the UK government to confirm that a UK public official’s signature, seal or stamp on the document is genuine.

You might need to do this if a local authority abroad has asked you to provide a document and they’ve said it must be legalised.  For details, visit www.gov.uk/get-document-legalised

The Permanent Bureau – www.hcch.net/index_en.php?act=text.display&tid=37 – has produced a series of three publications on the practical operation of the Apostille Convention.

Countries which accept the Apostille Certificate

For a list of Countries which accept the Apostille Certificate, please visit onesmartplace.com/featured-zones