A credit boom before each bust

I found a piece today (on the Blog.Spectator) that is so interesting and pellucid that I want to share it with you. The Blog is here. 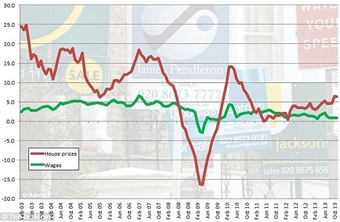 The author, Douglas Carswell provides a simple graph. It shows the four economic downturns Britain has been through (red lines) over the past forty years. Preceding each sustained fall in GDP (red line) since 1971 there has been a sharp increase in money and credit (blue line).

What is striking, says Mr Carswell, is that each downturn was preceded by the same thing: a surge in the growth of money (blue line). In other words, the bust followed an unsustainable credit-induced boom.

No matter what those in charge thought they were doing – CCC, ERM or inflation targeting – as the blue lines show, they nonetheless presided over an unsustainable growth in the money supply. Which was followed by a sharp downturn.

In a paper on monetary policy published in the House of Commons (15/1/2014), Mr Carswell will argue that we are in danger of repeating the same mistakes again. Yet another growth in money and credit – which will be followed by yet another falling red line on the graph.

Mr Carswell says that many of the warning signs of yet another credit-induced boom are already there; increasing reliance on consumer spending, surging house prices, falling savings ratio and a deteriorating current account balance.

He asks: What ought we to do about it?

His answer: First, we need a tighter monetary policy, with higher interest rates. But we also need some more far reaching change in the way we run the economy, too.

One of the reasons, Mr Carswell suggests in his paper, why successive administrations have failed to prevent these credit bubbles is not merely down to misjudgement. Part of the problem is that banks are able to conjure credit out of thin air.

Preventing endless boom/busts requires real banking reform. In his paper, he suggests how we might prevent runaway credit bubbles forming – but using the free market, rather than the flawed judgement of central bankers or regulators.

But low and stable inflation on one side of the equation has seen bank busts and credit crunches on the other. As long as bank’s lending is simply a function of their appetite to lend, combined with the appetite of borrowers to borrow – and restrained only by regulators – this fundamental instability will remain. A banks ability to lend must also be a function of its deposits. Mr Carswell’s paper proposes a simply way of achieving this.

If we are to avoid boom/bust 5, we need to change the way we manage the money.

Mr Carswell ends saying that he hopes his paper and its suggestions help. He says that he suspects at some point in the future we might need new ideas on monetary reform.

He is probably right.